"Something Bigger Than The World We Live In" 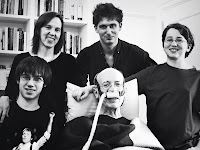 Historian Tony Judt, who died on Aug. 6 of ALS, offered an atheist's conception of the afterlife to NRP's Terry Gross in a March interview (rebroadcast last week):

I am much more conscious than I ever was, for obvious reasons, of what it will mean to people left behind once I'm dead. It won't mean anything for me. But it will mean a lot to them. And it's important for them by which I mean my children or my wife or my close friends that some spirit of me is in a positive way present in their lives, in their heads, in their imaginings and so on.

So in one curious way I've come to believe in the afterlife as a place where I still have moral responsibilities, just as I do in this life except that I can only exercise them before I get there. Once I get there, it'll be too late. So no god, no organized religion but a developing sense that there's something bigger than the world we live in, including after we die, and that we have responsibilities in that world.... The risk with something like ALS, where you sit on the wheelchair all day where you're looked after by professional nurses, and it's way beyond anything your family could do, where you live in one space, (unintelligible), while other members of the family live their normal lives, and you encourage them to, the risk is not that you do mean or bad things. It's that they lose a sense of your presence, that you stop being omnipresent in their lives. And of course, to the extent that you are present, you are surrounded by nurses, equipment, a sort of smell of a hospital, so to speak.

So it seems to be my responsibility, particularly to my children, also to my wife and friends, is not to be Pollyanna and pretend everything's okay no one would take me seriously if I said that but it's to be as present in their lives now as I can be so that in years to come, they don't feel either guilty or bad at my having been left out of their lives, that they feel still a very strong not a memory of particular actions but a memory of a complete family rather than a broken one. That seems to be something I can do or try to do.