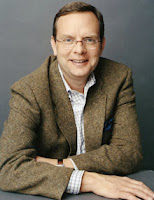 Todd Purdum (left) is a respected former New York Times correspondent who now writes for "Vanity Fair." Discussing his recent article about Washington's prevailing dysfunction with Fresh Air's Dave Davies on NPR, he talked about the always fraught issue of anonymous sources -- especially as it pertained to a controversial mid-2008 article (with the subhead "Bubba Trouble") in which he quoted a raft of unnamed FOB who were worried about how some of Bill Clinton's business and personal hi jinks might reflect on Hillary:

One of my friends, a former Clinton administration official, told me when the story came out that this friend had asked a colleague, do you think the story is unfair? And the answer was, well, it would be if it weren't true and well-sourced. So I guess what I have to count on and in some ways the publication of the story showed me that it isn't enough, is I have to count on my own and reputation and I have to count on the fact that my colleagues in Washington who know me, my colleagues in journalism who know me, my sources over the years, you know, in politics, know me to be reliable. So in some sense, I'm putting my credibility on the line by granting these people anonymity, I'll give you that.

And, you know, I wouldn't have done it if I didn't trust them and if I didn't think they were telling me the truth and I wouldn't have presumed on the reader's good faith if I didn't have faith in my own reporting. But I'll grant you that in this day and age that's probably a slender reed to hang on and people are welcomed to draw their own conclusions.

In my days with Richard Nixon I inveighed plenty against anonymous sources. The most famous one ever, Mark Felt (right), who helped the Washington Post with Watergate and later because known as Deep Throat, was mad Nixon hadn't made him FBI director. Felt was later convicted of abuses of power himself. Though Nixon and others suspected that he was the culprit, it was confirmed just a few years ago

, not long before he died. While Watergate went down in the 1970s, readers didn't know anything about his motives or character. He wasn't the spurned, angry operative who'd ordered illegal black bag jobs. He was Hal Holbrook in the parking garage, an unnamed mythic hero who was risking his job and maybe his life to save the republic from Dwight Chapin and Donald Segretti's dirty tricks.

Knowing Felt's identity at the time would certainly have helped readers understand more about the strange institutional dynamics that occurred as official Washington tried to get the measure of an anticommunist president who was keen to visit Moscow and Beijing. But the hard truth is that while many people and factors contributed to Nixon's downfall -- from his own actions and those of zealous, self-serving aides to the anger and ambitions of his political and institutional adversaries -- Mark Felt, while a favorite target of Nixon boosters, was probably just a little more than a bit player.

These days, most news organizations have better rules about how secret sources are used and described. A Times reporter, for instance, will write that someone is "an administration official who spoke on the condition of anonymity because she wasn't authorized to discuss the negotiations." Even that gives the reader pause to wonder what's afoot. You can figure out for yourself what Felt's descriptor would've been if the Post had been playing by the same rules 38 years ago.

Besides, as I listened to his NPR interview, I realized that I do trust Purdum. Why shouldn't I? He wouldn't have lasted this long in the business by making up or misusing quotes. Besides, as newspapers radically reconfigure themselves, our democracy will continue to depend on good information that trained reporters get by digging and by talking to people, whether on the record or not. Otherwise all we'll have is government propaganda and opinions recycled by denizens of the hackosphere hunched over laptops in Starbucks.

Still, the canny reader should always wonder what's up when a source has been given the gift of anonymity. Here's a tip: Sometimes a person can be a named and an anonymous source in the same story. (I know, because I've done it.) What's the reporter's motive? What's the source's? You may hope the reporter knows, but sometimes she may not. One more quote from Purdum's interview about his 2008 Clinton story:

[I]n a strange way that I only came to see later, [Clinton's anonymous aides and friends] were conducting through me a kind of effort to influence him, I think, by saying, you know, some of them had tried to raise these issues with him and were rebuffed. And it was a kind of a strange bank shot of an intervention or something in which that they were doing it indirectly through me.

There's a better word for that: Triangulation. It happens when family systems resist change, as they almost always do. When the 42nd president was asked about the "Vanity Fair" story when it was published, he called Purdum a "scumbag." According to systems theory, the insult was actually a predictable outburst at his cronies for calling him out. Purdum, who had positioned himself directly in the line of fire, says he and Clinton made up later -- and according to most reports, Clinton's been the soul of discretion ever since. Purdum's probably owed a commendation by the Secretary of State for an act of self-sacrificial public service.
By Fr. John at 10:23 AM

So glad to see you blogging again! And what a good, thoughtful post to re-start the blog. You make an excellent point about Felt in your discussion of anonymous sources. He could not (and never would have) brought down Nixon alone. But it certainly would have made the story of All The Presidents Men different, had readers and movie viewers known why he did what he did. I don’t find him an admirable character, but then my career has been very different from his.

Many people who work in Washington (even I, in a small way) sometimes become targets of allegations which they find difficult to rebut because they don’t know who made them and cannot judge their motivations. To some extent, I understand why reporters have to use anonymous sources. And the intervention angle in the VF piece is very interesting. If you can’t approach someone directly, that’s how you have to roll, sometimes. As someone who still values good, old-fashioned journalism, I’ve learned to parse stories in good, traditional newspapers very carefully. I’ve often wondered if some of the named people actually were anonymous sources, too.

A history professor, Timothy Burke, recently expressed some downhearted views recently as to “Does Evidence Matter Any More?” It would have been more effective if he would have used examples from both political parties—it comes across as more partisan than it might. But his larger points do raise some questions about evidence and how people treat and view it these days. I’ve been thinking about that of late as it relates to the issue of “false witness.” Starting with the Clinton administration, and then continuing through the Bush and Obama administrations, the political world has relied on more and more stories on talk radio and cable, and now on blogs, which are far fetched and lacking in substance. Yet one sees them emailed and talked and blogged about by many ordinary citizens. I sometimes wonder whether people know deep down that some of the stories are false or unlikely to be true, but pass them on any way because “the end justifies the means” and it hurts “the other guys.” That seems morally corrosive to me. Lying, and its cousins (selective use of data and exaggeration) seem to be casually accepted these days to a much greater extent than I remember growing up. Guess I’m showing my age, ha! Be on the lookout for partisan references in it – but Burke’s essay on evidence is worth reading at

I still haven’t learned how to do code for hyperlinks, so you’ll have to copy and paste!

All my very best,

I'll look forward to reading the Burke essay. You'd know better than I through your studies, but I imagine that political actors have always tended toward a utilitarian ethic. But could it be getting worse?

Mitch McConnell's correct answer over the weekend was this: "The President's a faithful Christian; of that I have no absolutely doubt, and to suggest otherwise hurts him and our country. And it's not the issue in any event -- the issue is jobs."

But the polls say Obama's vulnerable here, so McConnell stuck the knife in. That's what we do in politics, right? There was a time when perhaps we hesitated for a moment, both because it's the wrong thing to do and because it's the president of the U.S. But there are bigger issues involved, higher principles, right? And Hillary said the same thing in 2008, so it's fair game for me. And so the cycle goes.

Of course if journalism continues to die, we won't have any facts. Just spin. All life will be spin!

Dunno why that says anonymous (above). Just me!