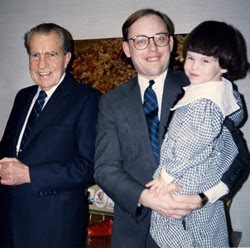 I'd almost forgotten about this gracious LA Times profile from February 1996, about my work with Richard Nixon as his post-presidential aide and library director. The original headline said, "Nixon's Taylor," and there was a giant closeup photo (not this one!) that frightened my children. The story wasn't my idea. The reporter called after the I'd organized a Nixon library PR jihad against Oliver Stone's "Nixon," which didn't contain a single completely honest moment. "Nixon" died at the box office not so much because of what we did but because it was just bloody awful.

I winced when I saw that the reporter had me down as my elder daughter's basketball coach (I was just the assistant). That's Valerie in the photo. But my blood ran cold when I saw this well-meaning quote from my buddy Hugh Hewitt:

I think probably with the exception of President Nixon's family, there is no individual walking around on Earth who knew Richard Nixon better than John Taylor. That's because he spent 10 years with him at the end of his life in close and constant companionship.

Typical Hugh. But I knew I'd come to regret it. And it happened soon enough.
By Fr. John at 5:17 PM