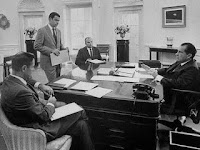 In 2007, Nixon biographer Conrad Black wrote, "There was no evidence [presented to the House Judiciary Committee during impeachment proceedings in 1974] connecting Nixon to campaign 'dirty tricks'..."

That was then. In an oral history interview with Nixon library director Tim Naftali, White House aide Dwight Chapin, who hired and directed dirty tricks operative Don Segretti and was later jailed for perjury, says that chief of staff H. R. Haldeman gave the order to launch the effort in the president's office as Nixon sat listening. If Chapin's contention is true, then the order was given before February 1971. After that, it almost certainly would've been caught by the White House taping system.

Listen to the news-making Chapin interview, slated for the new Nixon library Watergate exhibit, here.
By Fr. John at 10:10 PM