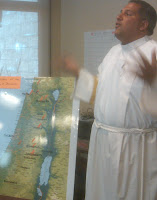 Fuad Dagher was born in Nazareth, making him "the man from Galilee," he said gamely to the people of St. John's Episcopal Church this morning. He's now rector of St. Paul's Episcopal Church in Shefa-'Amr, about 20 minutes by car from from his birthplace and Jesus's home town.

So he's lived his whole life in the middle of what we usually call the Holy Land but which Fr. Fuad takes care to call "the land of the Holy One." The Holy Land, he said, has become a bloody land of war, as Jews and Arabs battle over mere territory. Better to remember, he says, the true source of holiness, a reality that can't be constrained by politics or borders.

He had another piece of advice for 30 St. John's pilgrims he met with today between services, some who visited Israel and Palestine last summer and others who will make the trip in January 2011. Walk in the footsteps of Jesus Christ, he said. Run your hands along the damp rock in the Bethlehem cave where the church teaches that the holy child was born, and touch the hill of Golgotha at the heart of the Church of the Holy Sepulcher in Jerusalem. "But also remember the living stones," he said -- the Christians who have faithfully kept watch over the land of the Holy One for 2,000 years. "Sometimes when people meet me, and they see that I'm an Arab, they say, 'God is good! When did you convert?'", he said with a smile. But he was never a Muslim. His family have always been Christians.

Shefa-'Amr's population of 40,000 is composed of Muslims, Christians, and Jews, a showplace of interfaith comity of which the nation of Israel is considerably proud. If peace can make it in Shefa-'Amr, it should be able to make it anywhere. But Fuad has relatively little faith in the putative peacemakers in the Israeli government and the Palestinian National Authority -- not that he makes any bones about what he calls the original sin of Middle East strife, namely Israel's occupation of the West Bank and Gaza as a result of its victory in the Six-Day War in 1967. That proposition is open to debate, as is almost every proposition made in almost every argument about the Middle East (although the key elements of the two-state solution, which theoretically is now embraced by both sides and the U.S., amount to a return to the status quo before 1967).

Not open to debate is the alarming decline in the number of living stones, namely Arab Christians, who remain in the Holy Land. They now comprise less than 2% of the population. Christians are a vital buffer between Muslims and Jews. As they leave, prospects for peace decline further.

But meanwhile, for us St. John's Epiphany 2011 pilgrims, it's on to Jerusalem and Shef-'Amr. 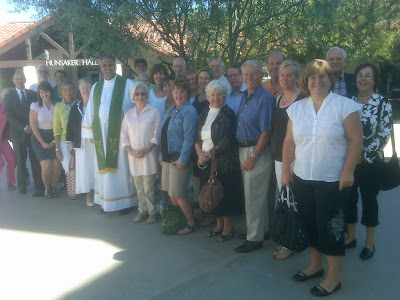