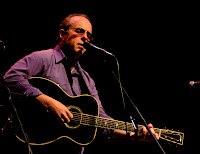 Sitting in an airport a couple of months ago, great American folksinger and songwriter Tom Russell, stuck with an old copy of "Rolling Stone," experienced discouragement:

Over 90% of their 500 best songs ever written [as identified by RS] were written before 1970. The summation is there ain’t been much to be excited about in the last forty years - with all our bleating, digital gadgetry, conferences, alliances, SXSW, “how to write songs” cartoon books, posturing circus rap, and lack of human artistic character. The chaos has led us, with our little IPOD head phones on, into the death throes of popular song.

Or maybe, Tom, it's just the people who drew up the list. For instance, you wrote this one, "Isaac Lewis," just a few years ago. Sure beats "Stairway to Heaven."