No, Of Course Not 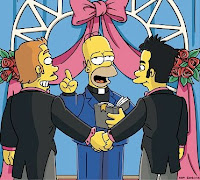 From the mainline schism desk, another group of Christians forming an ity bitty denomination who insist that it's not about the gay thing:

Lutherans throughout the United States have been reacting to actions by the Evangelical Lutheran Church in America reversing ELCA policy to allow pastors to be in same-sex relationships and to officiate at same-sex union ceremonies.

Lutheran CORE leaders note that the problems in the ELCA are really not about sexual behavior but rather about an ongoing movement away from the authority and teaching of the Bible throughout the ELCA.

My brothers and sisters, let us at least be direct with one another. It's definitely about "sexual behavior." It's not so much about the authority of scripture as about how discerning, faithful people read and, yes, are instructed and commanded by the Bible. Perhaps most of all, deep down, it's about gender. How about we honor the body of Christ by staying together and talking, reasoning, praying, and conquering our divisions for the sake of the glory of God?
By Fr. John at 12:18 PM

Love "itty bitty denomination" and just hope those who join it will return soon.