Facing a scandal over photographs of its leader wearing an enormously expensive watch, the Russian Orthodox Church worked a little miracle: It made the offending timepiece disappear.

Editors doctored a photograph on the church’s Web site of the leader, Patriarch Kirill I, extending a black sleeve where there once appeared to be a Breguet timepiece worth at least $30,000. The church might have gotten away with the ruse if it had not failed to also erase the watch’s reflection, which appeared in the photo on the highly glossed table where the patriarch was seated. 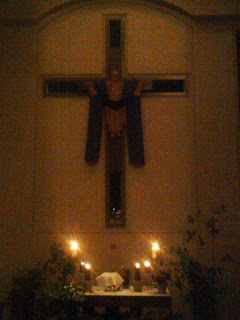 After a solemn service of Holy Eucharist on Maundy Thursday, when we remember the last supper, Jesus's commissioning his disciples to love one another, and his agony in the Garden of Gesthemane, some ministers strip the altar bare while others take what remains of the consecrated bread and wine to an altar of repose elsewhere in the church. This remnant is used for Holy Communion on Good Friday. Andy Guilford of St. John's Church took this photo early Friday morning during an all-night prayer vigil.
By Fr. John at 8:17 AM No comments:

"Islands In The Stream"


Nicki Bluhm and the Gramblers record cover songs on an iPhone when driving to gigs, this time on the road between San Francisco and Santa Barbara. The song was originally a hit for Dolly Parton and Kenny Rogers. More examples here; check out "You're No Good." Hat tip to No Depression.
By Fr. John at 8:02 AM No comments: 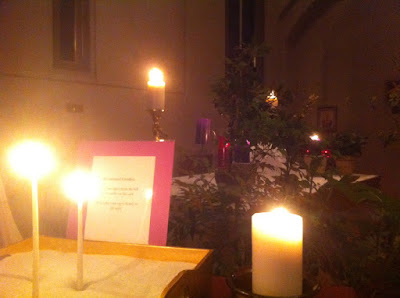 The altar of repose last night at St. John's
By Fr. John at 7:34 AM No comments: 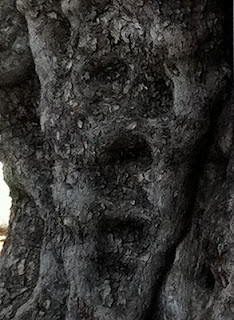 This olive tree in the Garden of Gesthemane is hundreds of years old; its roots may have fed the trees that sheltered Jesus as he awaited his betrayal. I took the photo in January 2011.
By Fr. John at 6:23 PM No comments:

"Could You Not Keep Awake One Hour?"

The John Chrysostom chapel, prepared for the all-night prayer vigil, beginning after tonight's Maundy Thursday service and continuing until noon on Good Friday
By Fr. John at 6:06 PM No comments:

The Palestinians Should Say Yes

Palestinians need to accompany every boycott, hunger strike or rock they throw at Israel with a map delineating how, for peace, they would accept getting back 95 percent of the West Bank and all Arab neighborhoods of East Jerusalem and would swap the other 5 percent for land inside pre-1967 Israel. Such an arrangement would allow some 75 percent of the Jewish settlers to remain in the West Bank, while still giving Palestinians 100 percent of the land back. 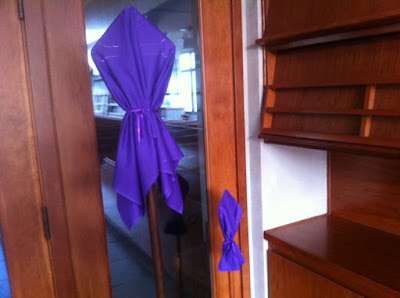 Processional crosses draped for Lent, but not for long
By Fr. John at 7:06 PM No comments:


Two mothers, two daughters. Hat tip to No Depression.
By Fr. John at 7:18 AM No comments:

Michael Miner wonders if Bob Woodward is still in denial about his famous source, Mark Felt:

[Max] Holland tells me he’s sure that Woodward at some point stopped believing Felt was any such person [a "scrupulous whistle-blower"], even though he kept up to the pose to the end—in his eulogy at Felt’s funeral and in the book he then wrote about him, The Secret Man. To Holland, this book is most interesting for everything Woodward found it necessary not to know—in particular the details behind Felt’s sudden resignation from the FBI—in order to draw his “flattering, if fuzzy and unsatisfying portrait of Deep Throat.” Holland concludes with the observation that “Felt’s success at manipulating the media is a cautionary tale.” In Holland's version of the Felt-Woodward relationship, there was less honor on either side than the book, or the movie, or certainly the legend would have it. 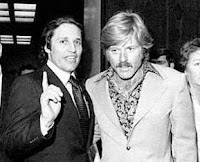 Interviewed for an article about Robert Redford's new Watergate documentary, to be broadcast next year, reporter Bob Woodward picks a fight with one of Nixon's aides, Frank Gannon, who helped 37 write his memoirs in the mid-1970s:

One of Nixon’s wars, Mr. Woodward said, “is a war against history” — intentionally speaking in the present tense. He cited a book review in The Wall Street Journal two months ago by Frank Gannon, a former Nixon aide, who asserted that many questions about the scandal remain unresolved. “How did a politician as tough and canny as Richard Nixon allow himself to be brought down by a ‘third-rate burglary’?” Mr. Gannon wrote. “Your guess is as good as mine.”

Mr. Woodward was having none of it. “The voluminous record shows that there are answers to some of those questions,” he said. “When I read the review, I thought, the war continues, and it should be met with facts.”

[Woodward] said he had guided Mr. Redford and the other executive producer of “All the President’s Men Revisited,” the media executive Andy Lack, to new material about the scandal, like information about the 2005 disclosure of Mark Felt, the onetime associate F.B.I. director, as the so-called Deep Throat source.

Woodward and Redford, who portrayed him in "All the President's Men," will want to consult Leak, the new book by Max Holland that argues, to the satisfaction of most reviewers, that Felt passed FBI secrets to Woodward and other reporters in pursuit of personal gain, namely his hope that Nixon would dump the new FBI director, L. Patrick Gray, and replace him with Felt. The portrait of the Woodward source as a principled whistle-blower, as conveyed by the legendary Hal Hobrook performance in Redford's film, has been, well, met with facts.

I can imagine Woodward (whom I've known since 1988 and last saw at the Nixon library in April 2011) saying that Felt's motives don't affect the accountability of Nixon and his men. But we'll surely learn better lessons from history if we know the whole story of Washington's power struggles during the Vietnam war, which pitted Nixon against his real and imagined political adversaries (inside and outside the White House) and also Felt's FBI and even the Pentagon. Black and white hats were more evenly distributed than we've been led to believe.
By Fr. John at 6:04 PM No comments: