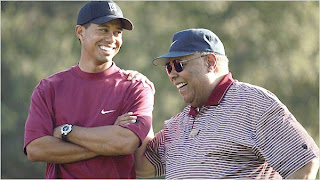 Watching Tiger Woods' raw, moving statement this morning, I felt that his father would have been proud -- or, depending on your perspective, is proud. Below is the eulogy I gave at funeral services for Earl Dennison Woods in May 2006 at Fairhaven Memorial Park in Santa Ana, California. (My colleague Catherine Sjostedt at St. John's School provided the John Donne quotation.)

On behalf of Tida, Den, Kevin, Royce, Tiger, and other family members and friends of Earl Dennison Woods, welcome to a celebration of his life.

Ten years ago, after heart surgery, Earl Woods was in the recovery room when his blood pressure plunged to zero and he had what people sometimes call a near-death experience – the bright and beckoning light, the welcoming peace, the incredible sense of well-being.

That didn’t turn out to be Earl’s time. He still had work to do, and so he found his way back. But what he said he lost that day was any fear of the ultimate authority of death.

We gather today out of love and respect for an extraordinary man – accomplished, brave, resourceful, eloquent, colorful, and committed to making a difference.

No matter what our faith traditions may be, perhaps we can all accept these words of the prophet Isaiah as a satisfactory portrait of the perfect joy of the heavenly city where Earl Woods has taken up residence. Note, please, the unmistakable party atmosphere:

On this mountain the LORD of hosts will make for all peoples a feast of rich food, a feast of well-matured wines, of rich food filled with marrow, of well-matured wines strained clear. And he will destroy on this mountain the shroud that is cast over all peoples, the sheet that is spread over all nations: He will swallow up death for ever. Then the LORD God will wipe away the tears from all faces and the disgrace of his people he will take away from all the earth, for the LORD has spoken. [25:6-8]

They tell us that heaven never closes – that choirs of angels sing constantly – that glorious light beams without interruption and without casting any shadows.

If so, Earl Woods will feel at home there. He would sometimes lie awake at one in the morning – exhausted, he said, but not willing to let go of the day, squeezing out every moment of experience that he could.

He said, “I love living life.”

Our hearts are heavy imagining what it felt like to be orphaned at 13. Father Miles had stressed sports, mother Maude education. Earl honored both their wishes amply.

We wince with some shame remembering that when he was a pioneering African-American player on the Kansas State baseball team, when the team visited the University of Oklahoma and stayed in Norman, Earl – still in his uniform from the day’s game – had to drive by himself to Oklahoma City to find a hotel where blacks were allowed to stay.

Our hearts fill with pride and gratitude remembering his two tours of duty as a Green Beret in Vietnam. One day Earl and a buddy from the South Vietnamese Army and just four other guys went up against a whole Viet Cong company, battled them all day, and prevailed.

Earl’s buddy was Col. Vuong Phong, nicknamed Tiger by Earl because of his courage and tenacity. He was, of course, the namesake of his youngest son. The first Tiger died of starvation in a North Vietnamese reeducation camp in September 1976, an outcome the three million young Americans who served in Vietnam struggled to prevent.

We note with sadness Earl’s own recognition and admission that the life of a military man kept him from spending as much time as he would have liked with Barbara and their three children.

Celebrating his devotion to Tida and their remarkable and beloved son, we also give thanks for the joy and contentment he found later in life from all of his beloved children, grandchildren, and great-grandchildren.

Our eyes widen with amazement at the ease with which this natural athlete mastered a game he took up when he was 42 – as though he was destined to love, raise, and instruct one of the greatest golfers in history.

Finally, we acknowledge Earl’s struggles in recent years against physical illness, our indiscriminate common enemy. For those who loved him, there is understandable relief this morning that his suffering since the recurrence of his cancer has finally been lifted.

And yet we find, amid all the joys and sorrows of this unique American life – all the triumphs and tribulations – we find that some things are missing from the biography of Earl Dennison Woods – things we are all used to – things that are all too commonplace in life. Missing from Earl Woods’s life were things such as self-doubt, and second-guessing, and recrimination, and obsessive regret, and self-pity.

The life Earl Woods loved was a large life, a meaningful life, a non-anxious life, a caring life, a generous life – a joyous and good life – surely a pleasing offering to the God who loves us all so well. Surely Earl Woods’s presence among us was a sign of God’s amazing grace.

Earl Woods was what we used to call a man of letters – the bestselling author of three books, a gifted raconteur who never failed to give interviewers an insightful quote, and someone about whom millions of words have been written, tens of thousands in the last three days.

John Donne was a 17th century English priest and poet who served as dean of St. Paul’s Cathedral in London. He wrote a reflection on death which suggests that we are all men and women of letters and that someday we will all know one another’s stories:

When one man dies, one chapter is torn out of the book and translated into a better language. And every chapter must be so translated. God employs several translators. Some pieces are translated by age, some by sickness, some by war, some by justice. But God’s hand shall bind up all our scattered leaves again for that library where every book shall lie open to another.

The story of Earl Woods – entwined as it is with all the stories he helped write – belongs now, as it ever has, to the author of all things.
By Fr. John at 11:04 AM 2 comments: 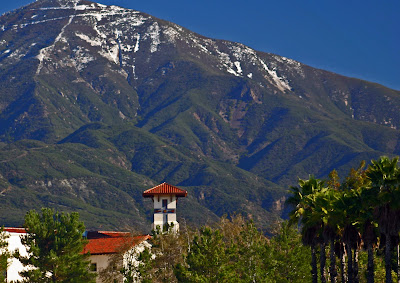 What a blessing to hear from time to time (well, twice) from people who miss reading my blog entries. My Advent hiatus became a Christmas-Epiphany-Lenten hiatus. If anyone (either of you) wonders why, blogging was taking too much ti 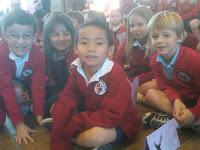 me from 1) reading and 2) playing the guitar, which is increasingly coming in handy around St. John's. As I begin my second full year as a full-time priest and pastor at a wonderful Episcopal church and school in south Orange County, California, I find myself somewhat less focused on offering little-read insights on U.S.-Iran relations (though I still think this is the way to go) and more on the virtually infinite richness of ministry. Imagine, for instance, seeing these faces from the altar on Ash Wednesday (or from anywhere, anytime).

I may be back soon. For now, if you're still reading, and if you're on Facebook, friend me. I still expound there, though more briskly. God's blessings.