Time To Get Watergate On The Way 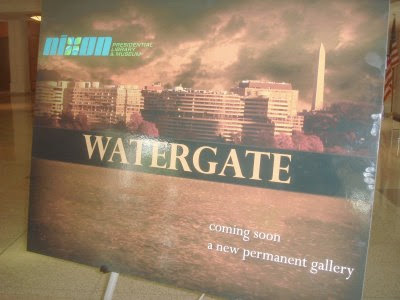 After the Nixon foundation's war over Watergate became public on Aug. 6, National Archives officials said final decisions about the Nixon library's new exhibit, due to have opened on July 1, would be made in a few weeks. But thanks to Wikipedia, one learns that the background for the new exhibit already appears on on the Nixon library website, complete with photos, White House tape snippets, and even a memo disclosing that Nixon's aides had conducted an investigation into whether one of their own, Fred Malek, was Jewish (see "Higby to Haldeman, July 8, 1971"). President Nixon had wanted his staff to find out how many Jews were working at the Bureau of Labor Statistics, where he believed liberal opponents were skewing data. White House personnel chief Malek was in line for the assignment, hence the theological exploration by chief of staff H.R. Haldeman's aide, Larry Higby. Malek gives more details in an oral history interview with library director Tim Naftali.

Rooting around, you can get a pretty good idea of the contours of the exhibit. Included, for instance, are details on the White House's attempts to intimidate the late Daniel Schorr, then a CBS correspondent. According to NPR's 1994 interview with Schorr, in 1971 Higby called J. Edgar Hoover, director of the FBI, looking for dirt. Instead, Hoover launched a full-field investigation. When Schorr naturally found out about it, the White House pretended that it planned to offer him a job, which Haldeman and Nixon discuss in this tape segment (which also reveals that they'd sicced the IRS on him). Finally, in December 1971, Hoover, laying one more lie on the pile, wrote a letter to the White House saying the investigation had been completed:

Mr. Schorr indicated surprise at being considered for a Federal position but, nevertheless, furnished the necessary background data.

It ain't pretty. It wasn't going to be. As a foreign affairs visionary, Richard Nixon made the world safer for billions of people in his own time and in generations to come. His positive legacy will ultimately withstand Watergate. But that doesn't mean the story doesn't need to be told. At Fox News, Sean Hannity loves to say about any scandal involving liberals, "If we were caught doing something like this..." Imagine if Obama's aides were caught engaging in shenanigans such as these. If prior administrations did things that were just as dark, as some argue, then let Watergate be fully illuminated in the hope that powerful men and women will at least hesitate to do it again.

To those who still insist that it's unfair to Nixon that presidents get kid glove treatment at some other taxpayer-operated museums, they've got a point, of course. It's an inevitable consequence of a president resigning, not that I ever want to see that proposition tested again. Maybe the lesson is that, after a decent interval, which is to say the first generation after a library opens, all the gloves should come off. Maybe striking a blow for curatorial objectivity at presidential libraries will be Nixon's last historic first.
By Fr. John at 6:29 PM