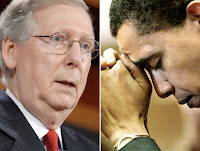 The president says he's a Christian. I take him at his word.

Hillary Clinton said something similar during the presidential campaign. Neither McConnell nor Clinton did it out of disrespect, or any real suspicion that Obama's isn't a Christian, but as an exercise in rank opportunism. If polling detects, as it did then and does now, that some voters are confused about Obama's religious affiliation, then the canny politician is tempted to encourage the mistaken impression or at least do nothing to ameliorate it. In the 1950s, the smear would've been, "My opponent says he's a loyal American, and I'm aware of no evidence to the contrary."

This year, it's part of a grand strategy McConnell's party's adopted in the run-up to the midterm elections: To portray Obama as being out of touch with the American people because of his health care and financial regulatory measures. Those are good issues, and they're fair play. But to gain additional traction, or so they hope, Republicans are also piling on Obama's grudging support of freedom of religious expression in lower Manhattan as well as the persistent rumors that he's lying about his faith.

The mosque issue, while patent demagoguery by conservatives who claim to honor the Constitution and Bill of Rights, isn't completely beyond the pale. But McDonnell's intimation about the president's religion is indecent. No class. I'd like to move to Kentucky just to vote against him.
By Fr. John at 2:33 PM