The View From Jackson Place 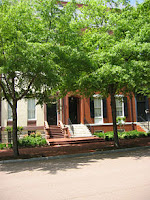 It's exciting to see the view counter near 250,000. Thanks to those who are still checking in at the rate of about 120 a day. I'm not posting much, but I'm writing like mad off-line, three pages a day until Christmas or bust. As for what continues to drive readership here, the Episconixonian proudly retains its status as the universal authority if you need an accurate transcript of Clark Griswold's interfaith prayer for his wife's aunt from the movie "National Lampoon's Vacation." If you don't believe me, Google or Bingle "Aunt Edna's Prayer." This post, about a Nixon/Alger Hiss-themed episode of "The West Wing," gets about a hundred readers a month.

The photo shows Jackson Place, the townhouse in Lafayette Square across from the White House, which the Nixon administration first set aside for the use of former presidents. In March 1994, after former President Nixon's last trip to Russia, my wife and Nixon's last and best chief of staff, Kathy O'Connor, were there when he gave a bravura off-the-record presentation to a high-ranking audience of sitting and former national security officials. It was the last time I saw him alive. More to come.
By Fr. John at 7:43 AM No comments: