Separating The Woman From The Boys 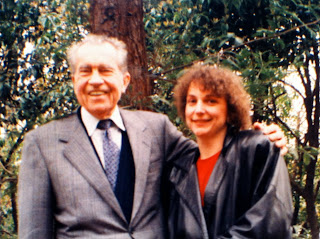 Journalist Andrew Gumbel has published an article about the last battle of Watergate: Impotent efforts by aging acolytes of disgraced Nixon chief of staff Bob Haldeman to chase off Nixon library director Tim Naftali before he could install a new Watergate gallery. Importantly, Gumbel reveals what happened after I left my job as Nixon foundation chief in February 2009 and was replaced by Richard Nixon's longtime aide and last chief of staff, Kathy O'Connor. Among her first (and last) challenges was managing the outrage of Haldeman's minions over Naftali's speaking invitation to former White House counsel John Dean in June 2009:

She established a more fruitful working relationship with Naftali, but quickly met a wall of resistance from some at the foundation because she expressed understanding for the Dean invitation. Naftali said she was called a “wimp” in a meeting he attended and effectively frozen out by her foundation colleagues.

That sounds just like the Haldeman boys' name-calling. But she's nobody's wimp. Instead, she was encountering the Watergate generation at their weakest and angriest. To Kathy, Dean was an inevitable if ill-timed choice as a speaker at the newly federalized library -- a major historical figure, after all, thanks to his pivotal Watergate testimony. But to those who soon seized control of Nixon's foundation, he was a rat who had helped send their buddies to jail for their Watergate crimes. One operative's wife complained on the foundation web site about how hard the criminal investigations and trials had been on the defendants and proclaimed that perjury wasn't even a crime -- pleasing news, one imagines, to Dwight Chapin, newly influential at the foundation, w 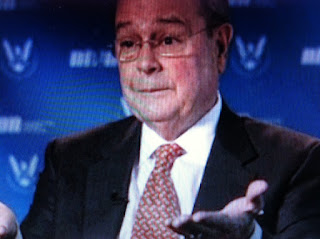 ho was among those who did federal time for perjury. He's shown here telling Naftali in an oral history interview that Nixon was in on the 1972 campaign's dirty tricks from the very beginning.

Kathy went to work for Nixon six years after his resignation and was holding his hand when he died 14 years later in April 1994. It's true she hadn't been with the old man in the White House when it really counted, as Watergate-era veterans often grumbled. By the same token, she hadn't organized any dirty tricks, ordered any burglaries, participated in any coverups, counted any Jews in federal agencies, or sicced the FBI on any journalists. As a result, her focus was on the old man's peacemaking legacy, not his aides' spotty reputations. Besides, over the years a few of them had kept scheming. Kathy and I were frequently pressured to get Nixon's campaign and non-policy aides more involved. The Nixon foundation had plenty of involvement with highly-respected heavyweights such as Henry Kissinger, George Shultz, Jim Schlesinger, and Pete Wilson. But we'd spent too much time protecting Nixon and his library from certain lower-level elements of the so-called old guard to be enthusiastic about letting them near the safe in Yorba Linda.

As Gumbel suggests, Kathy's advocacy of a mature response to the Dean invitation presented an opportunity for Nixonian payback. An operative publicly denounced Dean for being disgraced and disbarred, failing perhaps to recall that the same could be said of the library's namesake. Soon Kathy's career of distinguished, confidential service to 37 and his fractious family was drowned in a post-Watergate gusher of twilight testosterone as the good old boys massed in Yorba Linda. Ironically enough, Naftali's decision to commemorate the 37th anniversary of the Watergate break-in with a visit from Dean helped transform the Nixon foundation into the Haldeman foundation. A key if unwitting player in this process was a socially ambitious Orange County printer then serving as the foundation chairman who quit in a huff in 2010 after the operatives spurned his bid for a new, jumbo-salary foundation "president" job.

Their first move against Naftali was the secret enlistment of powerful friends in Washington to get him fired, but the wiry youngster from Quebec outmaneuvered the lumbering veterans. Then they assembled a truth squad featuring perjurer Chapin and tried to force the feds to water down the Watergate exhibit. In this effort, Andrew Gumbel and others report, they won key support from Sharon Fawcett, the National Archives official in charge of presidential libraries. Gumbel revea 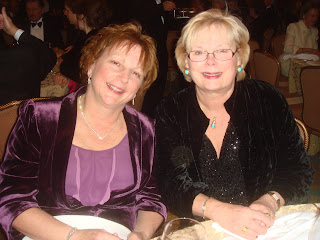 ls that the archivist of the U.S., David Ferriero (a stand-up dude, as historian and blogger Maarja Krusten might say), sided with Naftali against Fawcett, who quickly retired and was offered a consultancy by Haldeman's operatives.

We need more details about how they won Fawcett (shown here with Kathy in happier times, at a Nixon Center dinner). If her pivot had worked, Naftali would have been finished. Instead, he finished the work he was called to do: Establishing the Nixon library as an equal partner among other presidential libraries by moving Nixon’s records home to Yorba Linda and installing a Watergate exhibit that would pass muster with the scholarly community. In that accomplishment, Kathy O'Connor, who had served Nixon best of all by being tough enough to protect him and his library from more than one scheme and embarrassment, shares considerable credit.
By Fr. John at 11:15 AM 3 comments: 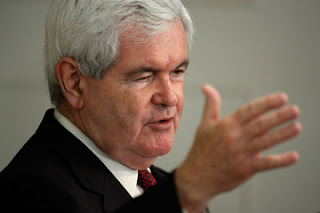 The impression I have of GOP dynamics at the moment is that many conservative activists fear nothing more than Mitt Romney's election. In a second term, President Obama would be a lame duck almost immediately. A President Romney would marginalize conservatives with business-friendly, relatively moderate policies appealing to a congressional coalition of center-right Republicans and centrist Democrats. To avert the wholesale reinvention (some would say restoration) of what it means to be a mainstream Republican, activists backed Palin, then Bachmann, Perry, and Cain. Intentionally or not, they're now flirting with the unthinkable: Nominating the unelectable, namely the attention-challenged Newt Gingrich. Nixon put it best: "The right would rather be right than president."
By Fr. John at 10:19 AM 1 comment: