The best Nixon-themed "West Wing" episode ever is the Alger Hiss story line in episode 2:16, oddly titled "Somebody's Going To Emergency, Somebody's Going To Jail," a line from the Don Henley song "New York Minute," with which the episode begins and ends. I don't remember an earlier episode using a rock and roll song, and while later choices by series creator Aaron Sorkin and his crew are sublime, this one I don't get. In view of the episode's dominant father theme, "The End Of The Innocence," one of the great paternal betrayal songs of all time and the title cut from the album on which "New York Minute" appears, would've been more apt, but maybe it was thought to be too obvious.

The episode aired in February 2001, a month after George W. Bush (speaking of father issues) took office. Sam Seaborn (Rob Lowe) has just learned that his dad had been conducting a long-term affair. Then Stephanie Galt worms her way into his office to enlist suppo 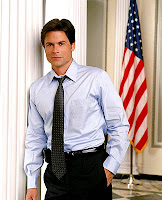 rt for a presidential pardon for her grandfather, Daniel Galt, the Hiss of the piece. He'd died in prison in the early 1950s, six months after a perjury conviction in connection with his alleged spying for the Soviets. (Read about the details here.) Stephanie's father -- "a sweet man in a bow tie," she says -- is dying, and she's driven to try to clear his father's name.

Having argued Galt's innocence in his senior thesis at Princeton, Sam swings into action with prophetic vigor, only to learn from the national security adviser that Galt had been guilty as charged. At first shocked he'd been so wrong, his rage at his own father nearly gets the better of him. He stops just short of denouncing Galt to his granddaughter and finally sends her away with just enough hope to comfort her father through his last three months. Then Sam gets a hug from Donna Moss (Janel Moloney) and calls his dad.

When the episode first aired, I wrote a mash letter to Sorkin, who wrote the script, praising his courage. The only discordant note (and it's hardly the show's fault) are the decrypted cables that the NSC adviser shows Sam. They're the fictional equivalent of the VENONA papers, Soviet cable traffic that the U.S. and British intercepted and decoded during and after World War II. The VENONA intercepts clearly implicated Alger Hiss. 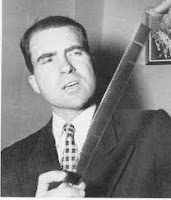 In "The West Wing," Sam learns that the intercepted cables weren't made available to those prosecuting Galt because their codes hadn't been broken until the 1970s. The reality is far more dramatic. When Richard Nixon and the House Committee on Un-American Activities were investigating Hiss in 1948, the government had the intercepts but, to keep the Soviets in the dark, didn't reveal them to Congress. Federal prosecutors didn't have them for Hiss's perjury trial. During all the years Hiss and his family proclaimed his innocence, nobody knew about VENONA. As two generations of American liberals castigated Nixon for having unfairly persecuted Hiss, the feds kept their own counsel.

As far as I know, Nixon was never told the cables implicating Hiss existed, not even when he was president. It's an irony at best and an injustice at worst that VENONA was only made public in 1995, decisively vindicating his actions in the first of his many political crises. Too bad it was the year after he died.
By Fr. John at 5:17 PM

What's far more unfortunate is that you take Venona as fact, when there is substantial question about their credibility. Their existence is being used by those on the hard right to justify the despicable actions of Joe McCarthy.

Thanks for the comment. I'd say the preponderance of the Venona record, whatever its imperfections (and the point of my post was that "West Wing" apparently took it seriously), improves the case against Hiss. McCarthy's smears are a separate issue.

GREAT EPISODE ESPECIALLY THE COROLLATION OF THE FATHERS, FR, THANKS FOR THE INFO AND THANKS ARRON!

Fantastic entry on a magnificent episode.