What If The Children Led Them? 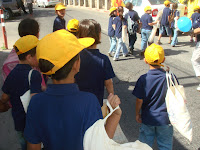 For a post about Alon Ben-Meir's Huffington Post series on the dearth of Israeli-Palestinian mutual understanding, I used photos I took several years ago of Arab Palestinian (shown here) and Jewish schoolchildren in Jerusalem. I was briefly tempted to append something about what might happen if we left peacemaking to the children but then decided not risk a callow-sounding and idealized P.S. to Ben-Meir's thoughtful words.

Then I listened to Dave Davies's "Fresh Air" interview with journalist Katherine Boo, who was talking about how the innate ethics of children in Mumbai's poorest neighborhoods are undermined by the harshness of daily living. Mumbai's struggles for survival are by and large more spirit-killing, I'm sure, than the struggle for political identity. Yet something of what Boo has observed probably applies to what kids in Jerusalem learn from political discussions around the dinner table:

[W]hat I see all the time in children in any country is an enormous ethical imagination. I really think that from a young age, people have a sense of justice in a society that is so corrupt that even to help a neighbor bleeding on the street is to risk your own livelihood and your own liberty because the police system is so corrupt.

I think that that innate capacity for moral action gets sabotaged, gets abraded, and I think that I see that constantly in my work. I see constantly, that in corrupt societies, in extremely viciously competitive societies, people's instinct to do the right thing gets turned upside down.