Nixon And All Those San Francisco Republicans 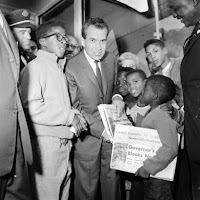 Throughout most of my own lifetime, most Republican presidential candidates have avoided San Francisco. Occasionally one will drop by on the Peninsula to raise money, but it’s usually a covert kind of thing. So when I started looking for signs of Republicans campaigning, I wasn’t expecting much. Maybe Eisenhower passed by on a battleship once …

Apparently I greatly misjudged the number of Bay Area Republicans in the 1940s, 50s and 60s. Republican presidential candidates didn’t just campaign here, they had huge parades the you would only see now after a Super Bowl win. And what about protesters? If there were any, they were at home shaking their fists at the radio....

I’ll need a presidential historian to weigh in here, but Richard Nixon seemed to love San Francisco. Not only was he here all the time, but he looked happy.

This photo, showing Nixon in 1962 during his gubernatorial candidate, is from Dr. X's Free Associations.
By Fr. John at 9:40 AM