The Whole Deal According To Meryl 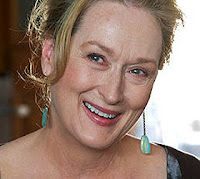 For Meryl Streep, great acting is all about fooling the other actors, which is why she wanted to keep the prosthetics and makeup to a minimum as she aged four decades in "The Iron Lady." Check out her wonderful conversation with Terry Gross on NPR's "Fresh Air":

STREEP: It's all about being free and having -- so I can look in the mirror and see me, not stuff. And it all has to do with, you know, it's not about the audience. It's all about fooling the other actors into believing that you are who you say you are because that's hard when you walk on set, and it's a big makeup job, and it makes it hard for them.

And I take my entire performance from them, so if they don't look at me and hate me appropriately or love me the way they're supposed to or find, you know, an old face but see the young one underneath, which is Jim Broadbent's task as Dennis Thatcher, then I'm lost. I don't have anything to go on because I can read that immediately in their eyes, you know.

GROSS: Gee, I never thought of it that way, that you have to convince the other actors that you're Margaret Thatcher.

I have to see this film, Streep is so good, and no wonder if her goal is to convince her fellow actors, that's a take on acting I'd never heard before.