A Compassion That Can Change Everything 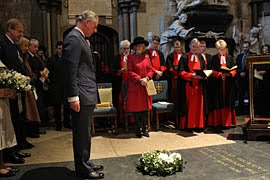 Today is the 200th anniversary of Charles Dickens' birth. The Prince of Wales laid a wreath at his grave in Poets' Corner in Westminster Abbey, and the Archbishop of Canterbury summed up:

In some ways not a great deal. Or rather there is a tension again and again in his books between a carefully, neatly resolved happy ending, and an immense burden of recognized, almost unbearable, unresolved suffering. He achieves the balance of those two most perfectly, for one reader, in Bleak House, where the past tense of Esther’s narrative is balanced by the present tense of unhealed suffering, the rain still falling on the Lincolnshire wolds.

But in that book, which one reader at least thinks is perhaps his most profoundly theological – though he wouldn’t thank me for that – in that book, we have one of the strangest, most shocking images that he ever gives us of compassion and mercy, and that is the figure of Sir Leicester Dedlock. At the very end of Bleak House, left alone in his decaying mansion, ho

lding open the possibility of forgiveness and restoration, “I revoke no dispositions I have made in her favor,” says Sir Leicester, with his typical dryness about his wife who has fled from him in guilt and terror. And in that appallingly stiff phrase we hear something of the hope of mercy. Almost silent, powerless, Sir Leicester after his stroke, dying slowly in loneliness, and stubbornly holding open the possibility that there might be, once again, love and harmony.

“We may confidently hope that God will forgive us our sins and mistakes, and enable us to live and die in Peace,” says Dickens for his children. And perhaps for us as grownups, or people who might quite like to be grownups one day, that image of the hope of God’s forgiveness is shockingly, startlingly, expressed in that lonely figure stubbornly holding the door open, revoking no dispositions made in our favor. Powerless to enforce love or justice, and yet indestructibly, even extravagantly, offering the only kind of love that is appropriate – the extravagant and excessive nature of human beings. An utterly unreasonable compassion, which because of its utter unreasonableness can change everything.