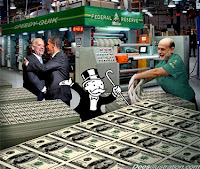 With interest rates so low, the only way the Federal Reserve can stimulate the economy is quantitative easing, which means (get this) using electronically created money to buy assets from banks and inject them into the economy. The risk is inflation, but Matthew Yglesias says it's worth running, the optimism engendered by the recent jobs report notwithstanding:

What the Fed governors ought to be doing is trying to clarify whether or not they really want a recovery. Do they want to see hundreds of thousands of people newly joining the ranks of the employed month after month? If it happens, after all, there will be some downsides. A jobs boom will mean a lot of new cars on the road, and gasoline prices may go up. Electricity bills may even rise as idle factories are put back to work, and vacant retail spaces turn into restaurants that need heat, air conditioning, and lights. Rents might spike in a few cities as people move out of their parents’ basement faster than new apartments get finished. That would be a small price to pay for a real recovery, especially when you consider that discouraged workers keep leaving the labor force even as the economy adds jobs. A sluggish recovery causes not only short-term pain, but long-term harm as the long-term unemployed see their skills deteriorate and end up gravitating toward low-productivity informal sectors rather than proper jobs. To get our economy back to capacity, the central bank has to tolerate a little bit of price inflation here or there as long as it doesn’t become embedded in a dangerous spiral.