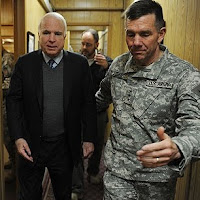 In 2010, President Obama rebuked the Supreme Court to its face for the super-PAC-unleashing Citizens United decision. This week, he announced his super-PAC would be passing the hat among the tycoons just like Mitt Romney and Newt Gingrich. Robert Scheer reminds us that this is Obama's second self-serving about-face on campaign finance and that at least one reform advocate has actually walked the talk -- and he's a Republican:

John McCain..."disarmed" by accepting public funding in the last election. Obama subverted what remained of political campaign finance reform by turning instead to private contributions, with the result that major Wall Street interests greatly financed his victory. It is not entirely true that shunning the PACs would have left the president at a disadvantage, since he commands predominant media space by virtue of his office. He could have exploited the fat-cat contributions to Republicans as confirmation that they are servants of the 1 percent that has caused the rest of us so much misery. Once again he has failed to take that case for economic justice to the American people and instead validated the Republican assault on what remains of our democracy.