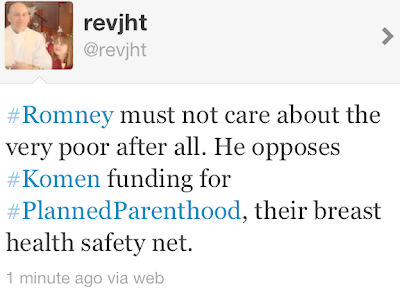 Did Mitt Romney even consider staking out a thoughtful position on this issue, decrying abortion, as he now does, but acknowledging PP's work in providing care to women who wouldn't get it otherwise? Here's just one example from this morning's Orange County Register, about an unemployed woman with no health insurance who learned that she could get a free breast screening at PP:

[Monique's] Benoit's mammogram led to an ultrasound and then more tests that found a benign cyst in her breast. That was followed by an operation to remove the mass. Her total bill for the entire process? A $30 lab fee. The rest was covered by Planned Parenthood with funds from the Orange County Komen affiliate.

Just a little nuance, Gov. Romney. A grownup's acknowledgment of the complexity of issues in a vast, diverse country. Or is that just too risky in this era of lock-step absolutism masquerading as conservatism?

The Romneys' past support for PP is detailed here.
By Fr. John at 10:57 AM