Giving Lawyers A Heep Of Grief 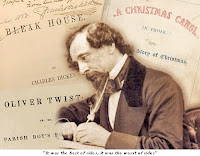 Acknowledging the contempt that one-time law student and court reporter Charles Dickens expressed for the British legal system by imagining characters such as Uriah Heep in David Copperfield and never-ending lawsuits for lawsuits' sake in Bleak House, law clerk Joseph Tartakovsky speaks up for his profession:

Isn’t it true that for both lawyers and novelists, whoever tells the best story wins? The difference is that lawyers (one hopes) take facts as they exist instead of inventing them. Dickens, for all his genius and wrath, was himself unable to undertake reforms, or protect clients, or draft fairer rules. He needed lawyers to achieve his vision of a just society. Even the inimitable novelist would agree that the two old trades must go hand in hand, together improving the noble system that, for all its Dickensian farce, makes us civilized.

In fairness, even in Dickens there are good lawyers and bad ones. Uriah Heep is a law clerk who usurps the practice of Mr. Wickfield, a diligent and highly ethical solicitor whose professionalism is eroded by alcohol and grief over his wife's death. Thanks to David (a stand-in for Dickens) and a plodding but virtuous young attorney friend from school, Tommy Traddles, the facts as they exist are exposed, Mr. Wickfield's fortunes are restored, and Heep is ruined. Even in a Dickens yarn, the system works.

His bicentenary is tomorrow. God keep his noble soul.

Hat tip to Denise Paddock, clerk to the Hon. Andrew Guilford
By Fr. John at 4:37 PM

Beautiful post! Well said, indeed. My fave always will be Nicholas Nickleby. You know why. Bless Charles Dickens! And John Taylor, too!

Thanks, MK! I'm in the middle of Dombey and Son now (plus Condi's memoirs). Blessings.

It’s not every day that something arrives to make life easier for a law student searching for a job. Thankfully, that day is here. It’s time to take advantage of this free and easy first step to the upcoming recruiting season. http://bit.ly/yofVWA

Thanks for posting, definitely going to subscribe! See you on my reader.