U.S. Vs. Russia And Nixon Vs. Reagan 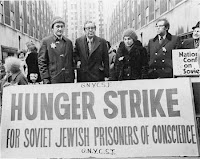 Sparked by newly opened Nixon White House tapes, the duke-out continues on the Washington Post op-ed page over who gets credit for enabling more Jews to leave the Soviet Union during the Cold War. Richard Nixon and Henry Kissinger have always argued that their private negotiations with Soviet leaders resulted in an increase in Jewish emigration. Gal Beckerman says that what really worked was public pressure, including the U.S. Congress's Jackson-Vanik amendment, in Nixon's era but especially Ronald Reagan's:

When [Mikhail] Gorbachev came to power in the mid-1980s and tried to save the Soviet Union from economic ruin, he understood that he would also need to reform his society, including opening the gates. "We have to resolve the Jewish question, the most burning among human rights problems," Anatoly Chernyaev, Gorbachev's closest foreign affairs adviser, wrote in his diary in 1986. After t

This essay at the Jewish Virtual Library provides useful background, without picking a favorite presidential policy. Its writer says that Soviet Jews' interest in leaving for Israel spiked after the Six-Day War in 1967. Whether Nixonian or Reaganite tactics worked better in helping them achieve their dreams is closely related to recent arguments in foreign policy circles about whether realism or U.S. ideals evangelism is preferable.

The Nixon approach was born of necessity and Nixon and Kissinger's temperaments. Governing in the midst of toxic politics and an unpopular war, they made a fetish of secrecy. They also abhorred linkage, whereby the Soviets would obtain advantages from the U.S. in exchange for treating their people better. First, Nixon always believed that the Soviet leaders had a massive inferiority complex and would react better to behind-the-scenes pressure than public tongue-lashings. Second, it was often Congress that did the linking, as with Jackson-Vanik in 1974, which predicated U.S.-Soviet trade relations on the Jewish emigration issue.

Nixon and Kissinger felt they could handle foreign policy by themselves, thank you very much. (If after reading this, you decide you like linkage, try it this way: "Dear China: Unless you start permitting free elections and freedom of expression, we won't let you buy any more of our Treasury bonds so we can run the federal government for the next three months.")

Beckerman probably discounts Nixon's "backroom diplomatic dealings" too much, whereas control-conscious realpolitikians probably underestimated the effectiveness of factors they couldn't control such as massive international pressure on the dying, desperate Soviet system.

What sent Nixon around the bend (when I was his chief of staff during the 1980s, I heard this in person, many times) was the idea that Ronald Reagan was ending the Cold War with his oratory

and threats to build a missile defense system. Nixon might have been more open to the idea that Reagan was playing his appropriate role as goad in the Soviets' last days if Reagan hadn't based his whole approach, beginning in the 1976 presidential election, on the contention that the Nixon-Kissinger policy had been a failure or worse.

In fact, they regularized the U.S.-Soviet relationship and decreased the chances of a catastrophic conflict while giving no ground to Soviet adventurism. For the first time, they gave our most dangerous adversary a stake in peace. They may even have given us a road map to solving the Iranian problem short of an Israeli or, or if the Saudis get their way, U.S. war that could be disastrous for us and the world. Instead of devoting so much attention to what Nixon and Kissinger said, we might look again at what they did.
By Fr. John at 8:06 AM

Very interesting, thoughtful essay, thanks for posting this. Funny how there seems to be something in the American psyche that yearns for and casts issues in terms of the sherrif who faces down the "bad guys" on the street, in plain view. As opposed to the behind the scenes efforts that make up much of diplomacy. You make a good point that both had their place.

Fred Graboske posted an interesting comment this morning under my piece on Hersh's New Yorker article. I may write a post later this week (probably won't have time today) about inside/outside efforts to deal with roblems and issues. Advocacy can be very complicated, lots of moving parts. Soemtimes it does take a number of people with different tactical approaches to get things done.

Thanks, MK. So often during the Cold War, we had the leader we needed -- Eisenhower's steadiness, Kennedy's calm, Nixon's creative triangulation, Reagan's prophecy, and (so often neglected) Bush 41's skillfulness.