Worrying With The Best Of Them 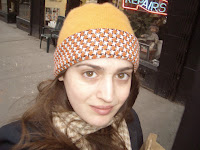 In "It Sounds Like You're Feeling," from Suzanne Rivecca's Death Is Not An Option: Stories, when the going gets tough, the tough catastrophize. Her character is a social worker who's been sent to a visually impaired therapist, Colin, to brush up on her empathy:

You are seized by a clinging, insistent hunch that your sudden teariness is entirely due to the fact that you're in a room with a dog and a blind person. Because it's unexpected, you tell yourself: the double vulnerability of them, their twinned soft mildness, how you can't stop wondering what they'd do if the dog got cataracts: would another, smaller creature be assigned to it, something with excellent eyesight, a trained raptor maybe, that would lead the way with the dog behind it and Colin behind the dog, the caravan growing and growing as they all aged and deteriorated, on and on like a series of Russian nesting dolls?

Email ThisBlogThis!Share to TwitterShare to FacebookShare to Pinterest
Labels: anxiety, books, Death Is Not An Option, James Gavin, Suzanne Rivecca