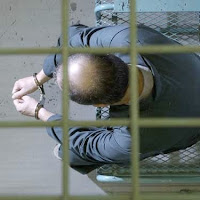 Chaplain Francis Stephen on Christmas in a London prison. Someone swiped an Advent candle but gave it back, plus memories of two unexpected gifts:

After the Christmas Day service a couple of years ago, a prisoner who spoke no English pressed something into my hand as he left. At first, I thought it was a piece of rubbish he was giving me to dispose of. Only after he had gone did I realise that I was holding not a ball of fluff, but a length of thread that had been plaited into a tiny cross and chain. The cross was less than an inch long, its arms the thickness of a pencil lead, but it had been so finely and tightly knotted that it was inflexible. It was beautiful. Heaven knows how many hours he spent making it. When I was next in the prison, I went looking for him to say thank you, but he had just been released. It’s one of the nicest presents I have ever received. The other time I found myself holding a piece of prison ropework, was rather less pleasant. I had been called to the wing to visit a prisoner who was lying with his face turned to the wall. The landing officer said he had been like that for days. I sat with the young man for the best part of an hour. Just as I got up to leave, he stopped me. ‘You’d better take this, guv,’ he said, as he reached under his bed to hand me a homemade rope formed into a noose.