He Cheers For Washington 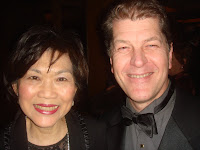 Kathy's and my buddy Steve Clemons, the founding executive director of the Nixon Center (shown here with the ambassador of Singapore at the last Center dinner we attended, in early 2009), is one of Washington's most influential foreign policy bloggers and commentators. He's interviewed in the Dec. 30 Washington Blade, which asked him why he lives and works in Washington:

Because Washington is the sun around which politicos here and around the world orbit. D.C. is a free trade zone for pursuing any cause — and to get a better world, whether through ending LGBT discrimination or improving America’s foreign policy course, one has to compete effectively in the game here.