Subsidizing The End Of Zionism 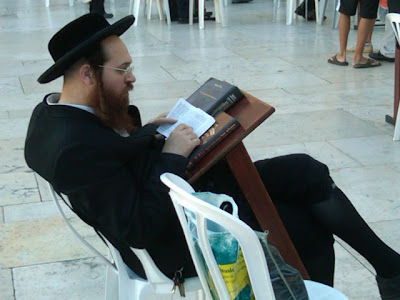 While Israel's defenders like to say, because it's true, that it's the only democracy in the Middle East, that doesn't mean it looks like any other. For instance, In Israel, separation of church and state, not so much. As the New York Times reports, the government pays millions a year to male haredim, or ultra-orthodox Jews, to study and pray instead of working. This category of Torah believers makes up nearly 10% of Israel's 7.5 million people. Some 60% of male haredim don't work at all.

For any number of reasons, the practice is being criticized by Israeli secularists and even a few haredim leaders themselves. But if you think one of the problems is that Israel is undermining the peace process by subsidizing religious extremists, think again. Most of of the haredim aren't Zionists. They don't believe Israel can truly be reconstituted as a nation until the Messiah comes. And guess what parts of Israel's population are growing fastest?:

If current trends continue, [an Israeli research institute] said, 78 percent of primary school children in Israel by 2040 will be either ultra-Orthodox or Arab.