Phil Hendrie, the radio host, said that you could tell a neighborhood was coming back when they put in a Starbucks and a Jamba Juice. There's neither in Barstow, California, at least in the part of town I wanted to see yesterday.

For a few blocks you get a flavor of old Route 66, the fabled cross-country blacktop that was superseded by the interstates

a half-century ago. While I saw two Route 66 Motels, I fear the trademark is losing value. I wonder if my daughters, both in their twenties, have heard of it. Even if they have, I'll bet they'd blank on Burma Shave.

During this holiday week, I felt a little lonely as a tourist. I'd hoped to visit the Route 66 Museum, but it's run by volunteers and only open on Fridays, Saturdays, and Sundays. No

t their fault. The information is probably available on-line. I'd driven in from Twentynine Palms, about 110 miles away, as an excuse to take a drive. After my visit, I wasn't surprised to learn that Barstow was recently ranked as one of California's ten poorest cities, with a third of its people on public assistance. There just aren't any jobs. Some economists will tell you that with the decline in manufacturing in the U.S. and througho

ut the developed world, intractable poverty such as Barstow's is what we get. It's a pretty spot, wedged between foothills and the desert. Its people deserve better.

I didn't mind driving back the same way, along state Route 247, for the same reason Monet didn't mind seeing the Rouen cathedral at different times of day. Driving through the deser

t, you find weather rather than the other way around, and I was in and out of sun and clouds the whole way. About three miles north of Lucerne Valley, the road became a causeway between lake beds that are usually dry and teeming with off-roaders. Either that, or they were alfalfa fields flooded with reclaimed wastewater. I'd have had to ask someone to know for sure. Maybe next time.

A few miles south, in Johnson Valley, I got plenty of information from the locals at a rock formation the kids are using for high desert IMs. When I drive back into Joshua Tree National Park later this morning, I'll check out some more rock graffiti at the unofficial Gram

Parsons memorial. My three-day retreat comes to an end today, after a night when my most pleasant of hotels (free wireless and crispy bacon) was buffeted by the same cold system that's giving northern Arizona a white New Year's. I hope it was quieter in Yorba Linda. Kathy doesn't enjoy enjoy hearing the wind at night quite so much. 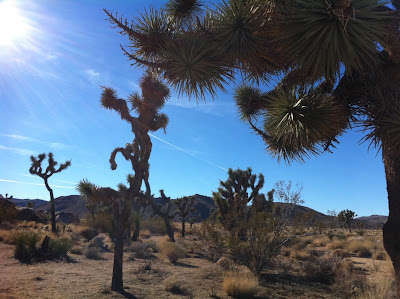