These Two Stories Are Not In Concorde 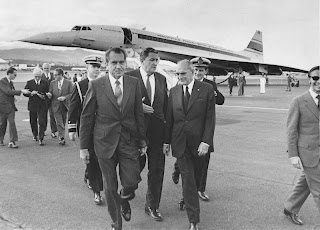 Trying to find something to illustrate my post below about Maarja's Washington Home story, I ran across this photo of President Nixon with the Concorde. According to alternatehistory.com, it shows Nixon arriving in England in August 1970 after a brief hop from Paris.

That didn't seem right, since 1) I don't think the Secret Service would've let him ride on the Concorde in 1970 (though I accompanied him on it once many years later), 2) the guy meeting Nixon doesn't look like Prime Minister Edward Health, and 3) U.S. presidents and British prime ministers usually don't need translators (more about him in a moment).

It didn't take long to learn the real story at UPI.com, which displays the same photo with this caption:

President Nixon leaves after taking a five-minute tour on Dec. 14, 1971, of the Concorde, the British-French supersonic jet, and said: "I wish we had built it." Nixon looked through the sleek SST (background) at Lajes Field, the U.S. operated air base outside the capital of the Azores. Walking with Nixon (at right) is Portuguese Prime Minister Marcello Geatana. Man in center is unidentified. The Concorde brought French President George Pompidou to the Azores for the meeting with pres. Nixon. (UPI Photo/John Full/Files)

The man at center is the late diplomat and CIA official Gen. Vernon Walters, Nixon's friend, legendary language savant, and one of God's great gentlemen. You can also see Henry Kissinger at Nixon's left.
By Fr. John at 1:53 PM