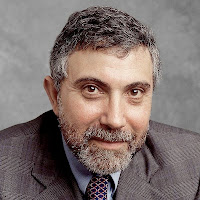 Paul Krugman calls Republicans hypocrites for acting like deficit hawks all year only to acquiesce in a $800 billion tax-cut extension without getting a dollar's worth of budget cuts in return.

That's not fair. It's ironic instead of hypocritical. Actually, it's not even ironic. It's revelatory of a mindset that Krugman doesn't quite understand, at least intestinally, as he shows when he writes:

Senator Jon Kyl of Arizona — who had denounced President Obama for running deficits — declared that “you should never have to offset the cost of a deliberate decision to reduce tax rates on Americans.”

It’s an easy position to ridicule. After all, if you never have to offset the cost of tax cuts, why not just eliminate taxes altogether? But the joke’s on us because while this kind of magical thinking may not yet be the law of the land, it’s about to become part of the rules governing legislation in the House of Representatives.

That's historical memory, not magical thinking. The federal income tax has been legal, in the form of a constitutional amendment that was ratified in 1913, just seven years longer than women have had the right to vote. I wouldn't say the idea that government can naturally confiscate 25-35% or more of our income is necessarily part of our DNA quite yet.

We obviously can't afford to abolish it. Indeed rational deficit and debt reduction means cuts Democrats and Republicans don't like (Social Security and defense) and more revenue from someplace (us). As long as everyone suffers a little for the sake of all, I'm game.

But Kyl's proposal -- that giving people their money back is categorically different than building an aircraft carrier or launching a new program -- isn't magical or mysterious. It's gratifying evidence that part of our political mind still remembers that the federal behemoth that has sometimes seemed to billow and burgeon of its own accord is all contingent on the consent and confiscated wealth of the governed.

Krugman's right that Reagan-addled Republicans aren't facing up to the deficit's stunning dimensions -- but again, that's not hypocrisy; it's faith. Many honestly expect that tax cuts will trigger an 1980s-style recovery leading to 1990s-style surpluses. In the meantime, going back to Krugman's charge of hypocrisy against Republicans, I wish progressive-minded elected officials would own up more openly to their ideological predisposition toward ever-larger government and permanently higher tax rates. As long as they don't, who's really being disingenuous?

In British politics, at least, you know who's for big government and who isn't. In the U.S., everybody's for deficit reduction, which means either irresponsible tax rate reductions or confiscatory gouging, draconian social welfare cuts or trillions in stimulus spending, depending on who's speaking. It's not just our governments that are impoverished. It's also the language we use to talk about public policy.