Nixon's Men And Right And Wrong 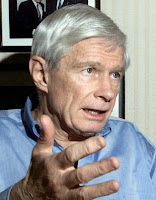 Maarja Krusten explores the nuances that emerge from the on-line background material Nixon library director Tim Naftali assembled for the library's new Watergate exhibit, which was opposed by his former White House aides:

One of the topics captured in video interviews is Nixon’s effort while president to remove some civil service officials from the Bureau of Labor Statistics (BLS). A bureau official had angered the president due to the way his unit released some unemployment statistics. The topic and its handling offer many lessons on multiple levels. For one thing, while Nixon was alive, his representatives blocked NARA in 1987 from opening a White House document which read, “”everyone in BLS is Jewish look at all sensitive areas ck. Jewish involvement . . . esp. uncover Jewish cells & put a non-Jew in chg of each.” Only after Nixon died did NARA release that note to the public. In considering the current controversy over the Watergate exhibit, keep in mind that a key piece of evidence of Nixon’s mindset remained unavailable for consideration by scholars for 10 years, despite being marked by NARA for release in 1987.

And then there is the contrast between two of the former Nixon White House officials whom Naftali interviewed for the BLS section of the proposed Watergate exhibit. (The video clips are available on the Nixon Presidential Library’s site.) The two men – Charles Colson and Fred Malek – provide a contrast between two cultures, one more capable of learning and introspection than the other, in my view. Colson admits that Nixon sometimes issued directives to him that he knew were wrong. Malek largely shrugs and says of Nixon’s request that he identify Jews at the Bureau, no harm, no foul.