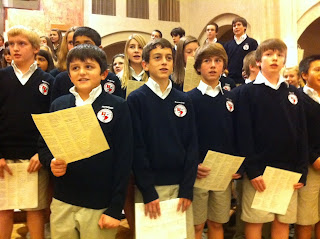 During St. John's School's lessons and carols service last night, Headmaster Jim Lusby and I were in the front row, with a corps of 7th graders (my students in New Testament on Tuesday afternoons) standing just a few feet away. As 75 angelic voices swelled around us, Jim whispered, "The 7th grade boys are doing well this year."

Not that they didn't sound great, but he was referring to their deportment. "They may be a little worried to see us together," I said. "They realize we really do know each other."

That's Jim at right, with the bow tie. As any teacher will tell you, the upstairs backup can come in handy. While I've been at St. John's for over six years, this was the first time I'd attended a lessons and carols service as a member of the Middle School faculty. I was reasonably confident about the new challenge, since I'd taught almost all of the same kids in 5th grade. But in these young lives, those particular two years turn out to have been long and eventful. We're having a great time together. And yet there's wisdom in the insight of a retired 7th grade teacher, now in her 80s, who was quoted to me as saying, "Seventh graders are interesting and in transition."

In staging our annual Advent and Christmas iteration of an Anglican tradition that dates from the 19th century, choir director Lori Speciale shows what it takes to organize middle schoolers into coherence and even transcendence: Skill, discipline, and love. As 350 parents, family members, and friends watched and listened, our students retold the Christian story through scripture readings, anthems, and two hymns in which the congregation was invited to join.

Gary Toops was at the mighty Rodgers organ, and St. John's Church's Buddy Lang had brought his trumpet and some distinguished colleagues on violin, woodwinds, and percussion. When this whole ensemble was playing and singing, with the girls (and sti 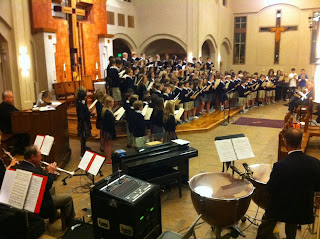 ll some boys) taking the descant parts, it just sounded magnificent. If we weren't yet in the Christmas spirit, it had entered the hearts of at least some of us by the time we got to verse three of my favorite Christmas hymn, which has a line that encapsulates the gospel: "Word of the father, now in flesh appearing." The children really do lead us, every time.
By Fr. John at 9:15 AM