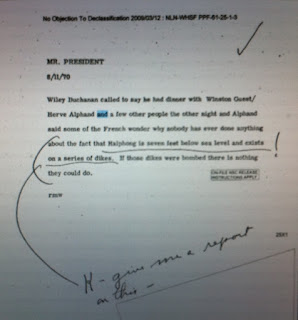 From records opened today by the Nixon library, an example of how quickly loose talk can get to the president's desk. On Aug. 11, 1970, Rose Mary Woods, President Nixon's secretary, sent him a memo describing a dinner attended a few days before by, among others, Wiley Buchanan, President Eisenhower's chief of protocol; Herve Alphand, the former French ambassador; and Winston Guest, famous for being Churchill's second cousin, playing polo, and marrying socialite C.Z. Guest. Woods continued:

Alphand said some of the French wonder why nobody has ever done anything about the fact that Haiphong is seven feet below sea level and exists on a series of dikes. If those dikes were bombed there is nothing they could do.

Nixon underlined the idea and put one of his trademark exclamation points next to it, adding a note to Henry Kissinger, his national security advisor: "K -- Give me a report on this." Whatever Kissinger's response was, nothing happened. The Johnson and Nixon administration considered various schemes for trying to destroy the extensive system of dikes and related structures along North Vietnam's Red River delta, but they never did it.
By Fr. John at 9:53 PM