In The Beginning, There Was Evil 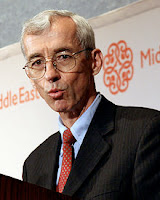 Paul Pillar is a former high-ranking CIA analyst who believes "the more that religion is infused into public life, the more that mankind suffers." Newly provoked by the State of Kentucky's financial support for a Bible-based theme park and the latest trendsetting comments by Sarah Palin, Pillar, blogging at "The National Interest," writes:

Religious beliefs inherently contain the seeds of intolerance, and thus of conflict and extremism, in ways that most secular belief systems do not. If one believes one's dogma comes from divine will and providence, it can less readily be compromised in good conscience than beliefs of more mundane origin. And those on the other side of a conflict can be seen not just as in opposition but as evil.

Religious belief, because it deals with the unknown and unknowable, must quite literally be a matter of faith. And questions of faith, because they cannot be resolved through public debate, appropriately dwell in the realm of the personal and the private. Once injected into the public realm and more specifically into matters of state, then they become one more form of the tyranny over the mind of man against which the deist Thomas Jefferson swore eternal hostility upon the altar of God.

Well, except for the secular belief systems of communism and National Socialism, which mass-produced intolerance and extremism in a magnitude of which al-Qaeda and the Taliban can only dream. Closer to home, just this week, the secular left seems pretty intolerant of President Obama's idea that rich people should be allowed to keep a little more of their own money so they can goose the economy for the next two years. Their rage is palpable, and while I don't hear them saying those who disagree with them are necessarily evil, I sometimes hear them coming pretty close.

It seems to me that intolerance and extremism are inescapable expressions of human nature, the natural byproducts of pain, fear, pride, or, usually, some mixture of the three. Far from being the root cause of these inclinations, faith practice at its best helps people notice and control them. If instead religion reinforces or encourages what is worst about people, it means that religious leaders and institutions aren't doing their jobs. They've let their own pride and certitude (or fear and pain) prevent them from appreciating the awe and humility with which any sane person approaches the altar of the Almighty.

Around the world, there are all too many such religionists. That religion must do better is an axiom that many of its practitioners readily accept. But the idea that humanity is safe when it ignores the Creator's judgement perished in the death camps and gulag, in Cambodia and Rwanda. Of course that prideful idea has perished many times in the many thousands of years of human history that preceded all those modern savageries, but the idea keeps being resurrected. Even when people betray God by wreaking havoc and pretending it's for his glory instead of their own, there's a certain deviousness involved in saying that the crime was committed by God or even by religion, when the blame really belongs to the human creature acting as it has since before anyone could even mouth God's name.
By Fr. John at 6:42 PM

Mr. Pillar is attempting to present an opinion about religion through rationality and logic. His presentation is not bad, but is flawed in a number of ways.

I could conclude that rationality and logic are "bad" because his conclusions are not supported. However, I believe that these approaches are sound but, with erroneous assumptions, will not necessarily lead to truth.