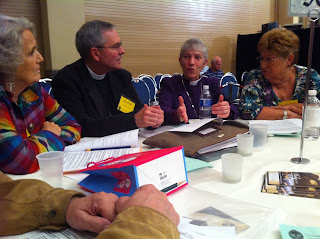 In his talk to LA Episcopalians on Saturday morning during our annual convention, progressive evangelical leader Jim Wallis described "playing the Sam Harris role" in a conversation with Muslim women on the subject of interfaith conflict. "I said, 'Wouldn't it be better if we just got rid of religion? Isn't religion the problem?'"

Wallis said one of the women replied, "Religion isn't the problem. It's males' interpretation of religion."

Wallis said the most important book he'd read in years was Half The Sky by Nicholas Kristof and Sheryl WuDunn, who argue that a significant percentage of the world's worst problems could be ameliorated by the education and economic empowerment of women in the developing world. Be that as it may, the developed world still needs to empower them in the church, as well as in mosques and synagog

ues. Roger Ebert has an apt post about how most religious institutions devalue women by barring them from ordination, segregating them from men, or excluding them from leadership positions.

Among the few denominational exceptions is the Episcopal Church, and the Diocese of Los Angeles is a standout in TEC. This time last year, we elected two women as suffragan, or assistant, bishops, Diane Jardine Bruce and Mary Douglas Glasspool. They concelebrated our Holy Eucharist service Saturday morning, an unthinkable event in the vast majority of the churches where mass is said.

church or diocese is a paradise of gender equity. We heard a report that even in LA, male priests are paid more than women for comparable work. Nor has our stance on controversial questions earned universe acclaim. Bishop Glasspool is shown (top left) moderating a conversation about the proposed Anglican Covenant, which would impose unprecedented disciplinary procedures on the loosely federated family of churches know as the Anglican Communion. Punishment would be meted out when dioceses or provinces took actions that were offensive to other dioceses or provinces -- such as the ordination of women as bishops (which divides the Church of England) and TEC's continued insistence on the full sacramental stature of gay and lesbian people.

As usual, our two-day convention wasn't all speeches, budgets, resolutions, and elections. We heard a stemwinding sermon from our Diocesan bishop, J. Jon Bruno, urging everyone to bring a friend to church over Advent and Christmas (which I essentially repeated at church this morning). Calling in from Minneapolis, our beloved retired assisting bishop, Bob Anderson, who is in the late stages of pancreatic cancer, gave us a five-minute lesso 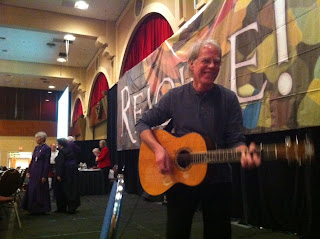 n on how to die in peace and faith (which I also repeated).

We prowled Riverside's historic, festooned Mission Inn. There was plenty of time for fellowship within our deputations (that's most of the crew from St. John's, above right) and with friends from around our far-flung, five-county diocese. Our worship was organized by Canon Randy Kimmler, a gifted liturgist. For the first time in my ten or so conventions, we didn't have an organ, just Fran McKendree and his Martin*. His voice, fingerpicking, and spirit filled the vast space as he led us in singing hymns, praise songs for thinking people, and Taize numbers.

A noted '70s folkie and an Episcopalian since youth, McKendree's become a welcome fixture at LA conventions and clergy conferences. For about two years after I saw his band, McKendree Spring, in high school, his composition "Got No Place To Fall" was my favorite song. Finding an mp3 would be the promised land.

***
*Fran writes that he was playing a 34-year-old Larrivee. Pretty embarrassing, since I'm a Larrivee guy myself.