A Bush, Not A Clinton 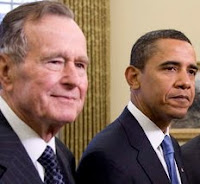 It was in 1990 that Mr. Bush broke one of the most celebrated promises in modern American politics —“Read my lips: no new taxes,” as he put it in 1988 — in order to control federal spending. In the same way that Mr. Obama struck his deal to secure lower tax rates for the middle-class and win an extension of unemployment benefits, Mr. Bush gave on tax rates to get “pay as you go” rules — meaning that no further spending could be approved without compensating budget cuts or revenue increases. It was the beginning of the fiscal discipline that helped create the budget surpluses of the 1990s.

While Mr. Obama’s immediate concern is stimulus and Mr. Bush’s was deficit-reduction, both gave way on issues critical to the true believers within their parties. For Mr. Bush, it was political death. He had never been fully trusted by a Reaganite Republican base. Like Mr. Obama — who is unhappy with his “sanctimonious” left wing — Mr. Bush was no ideologue.