What He Said And What He Did 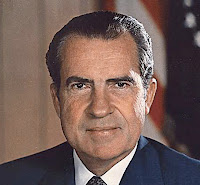 The New York Times figures out that Richard Nixon thought differently about Israelis and predominantly liberal American Jews. Back in May 1994, when former chief of staff Bob Haldeman's White House diaries were published, I ventured the politics-based argument myself, as I had on other occasions. It got to be a bit much in the spring of 1997, when Nixon's son-in-law Ed Cox and former speechwriter Ken Khachigian, a loyal Cox water carrier, attempted to designate me as official Nixon foundation spokesman on the anti-Semitic statements of Nixon family friend Elmer Bobst, whose widow was a library contributor and Cox legal client. I told Cox I wouldn't be on the wrong side of anti-Semitism for him or anyone else and hung up the phone.

I still believe the preponderance of Nixon's unpleasant racial commentary had to do with his being born in 1913. As for the rest, it will be up to history to balance his loose talk -- which he made the massive error of tape-recording between February 1971 and July 1973 -- with his pro-Israel, pro-African-American, pro-Native American policies. To paraphrase John Mitchell, don't just pay attention to what he said. Remember what he did.
By Fr. John at 12:58 PM