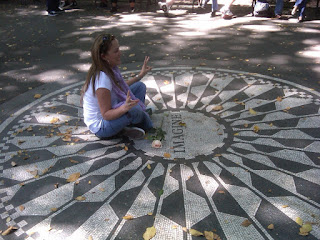 Whenever I hear two songs in a row on the radio by the same artist, I still wonder if somebody died. On the evening of Dec. 8, 1980, WNEW-FM, then New York City's flagship rock station, played a long John Lennon block. Then the DJ (had they brought in the legendary Scott Muni that dark night? I can't quite recall) said that Lennon had been murdered outside his and Yoko Ono's apartment building at 72nd St. and Central Park West.

By then, I'd been working for former President Nixon for three months in his office in 26 Federal Plaza. The next day I typed out a few pages saying that Lennon and the 37th president, as prophets of peace, had been toiling in different sections of the same vineyard. Yes, it was impossibly callow. Among other things, my essay overlooked the FBI's surveillance of Lennon during the Vietnam war, though I probably got in a lick or two about the naivete of Lennon's facile if heartfelt peace talk.

Two of Nixon's more senior aides, Paul Bateman and Ray Price, wisely induced me not to submit it to the Village Voice, which had been my plan. But when someone else wrote to the Voice saying that if a Beatle had to get shot, too bad it wasn't Paul McCartney, I did submit a letter taking umbrage, which, as I recall, was published. Another letter to the Voice around the same time said in its entirety: "Imagine John Lennon with no possessions," which seemed churlish then and even more so now. 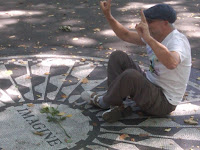 At Strawberry Fields, in Central Park right across from the Dakota, sitting crossed-legged and flashing the two-fisted peace sign appears to be de rigueur. Maybe there was something to the Nixon comparison, since tourists standing in the doorway of his chopper at the Nixon library do pretty much the same thing. When Kathy and I visited the Lennon memorial on Friday, it was more moving than ever. To have just recorded tunes as sweet as "Woman" and "Watching the Wheels," to have been so contentedly in love, to have one of the greatest rock and roll voices ever (think "Twist and Shout" and "Yer Blues"), and to die at 40. You get to be my age, and the poignancy and tragedy definitely creep up on you. Come together, right now!