May All Her Future Libraries Be Less Interesting 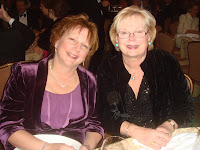 To illustrate another fascinating post about the policy, politics, and personalities swirling around Richard Nixon's White House records, former Nixon archivist Maarja Krusten reproduced this photo, which I took in Washington the week before President Obama's inauguration. That's Kathy O'Connor, Nixon's last chief of staff (she was holding his hand when he died) and former acting executive director of the Nixon foundation, with National Archives official Sharon Fawcett, with whom Kathy and I worked for countless hours to bring the Nixon library into the federal fold in 2007. At her blog, Maarja and I traded observations about the pressure that Fawcett is undoubtedly still under in connection with the Nixon library, especially when it comes to the opposition of Nixon's former White House aides to a new Watergate exhibit.
By Fr. John at 11:04 AM

Very nice post, thanks for writing it. That is so touching about Kathy holding Richard Nixon's hand as he died.

It's unfortunate that the story of NARA's presidential libraries office--which actually is very interesting--is hidden away for the most part. Some day someone will come along and research it and write a very interesting book! Benjamin Hufbauer (an art historian) already has written a very good book about the museum side of the presidential libraries. There's a lot more to explore, however. I don't think Sharon is going to write memoirs after she retires :-) but what a story it would make if she would!

That's not a project for you?

How'd you guess! But it'll have to wait until after I retire. Hmmm, since that's several years hence, I'd have to start submitting FOIA requests soon, given how long it takes to get through some of those through those backlogs!