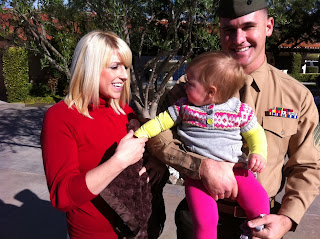 Everyone, probably, is reading too much into Richard Hobrooke's last words, which were about ending the war in Afghanistan. And yet Tim Fernholz, a critic of the war, poses the question that's been in the back of my mind since last year, when President Obama began his agonizing reappraisal and then announced a major escalation of the war. Why exactly are we still there?:

There is the fear of giving terrorist groups unchecked space to prepare their next moves, but there are many safe havens and more effective interdictions of these efforts, including rebalanced investments in intelligence and security at home. There is also fear of seeing Pakistan's stability threatened by militant Islamists, but the current strategy doesn't seem to advance that end, especially as elements in the Islamabad government continue to maintain close relations with the Taliban.

Last week, St. John's School hosted some Marines and their families from Camp Pendleton, in northern San Diego county. For seven years, we've had a close relationship with the "3/5," the Darkhorse regiment. They've lost 19 young men since early October, and two just last week, while fighting in the Sangin River valley, which is thick with Taliban insurgents.

During an all-school chapel service, I told our students -- few if any of whom remember Sept. 11 -- that our volunteers are doing better than the British and Russians did fighting in the toughest place in the world. Preaching about war during Advent, in a building built in the holy name of the Prince of Peace? Not that hard, actually. Jesus understood that his people lived in a broken world.

Besides, no one hates war more than these soldiers and their families, who are giving and sacrificing so that every day can be Christmas for the rest of us. I know the president also hates war, and this war. If he insists our interests are at stake, I'm inclined to believe him. Friends have also reminded me of the American tendency to make abundant promises in

the course of an intervention only to leave, and leave behind chaos, once exhaustion or a new flirtation with realism overtakes us. And yet when knowledgeable observers say or write that we'll be in Afghanistan "forever," I cringe. Doesn't everyone? After chapel last week, I said a blessing on this baby, Austin, and his twin brother (children #2 and 2.1 of the couple above) and called them future Marines. I prayed to myself that all wars should cease before they get the idea of following in their father's footsteps. If they do it anyway, I'd really prefer they stayed away from Sangin.
By Fr. John at 8:32 AM