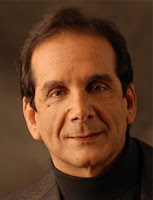 Her response was vintage Palin, combining a sort of schoolyard banter with bristling resentment. “Oooh. Sorry that I’m not so hoity-toity,” was the best she could come up with as a retort while gesturing that she was not someone who had to put her finger in the air to determine what to think, as if the intellectual yet down-to-earth conservative sage Krauthammer was some liberal media consultant. Just as disturbing as the obnoxiousness of her response was the vague thought that perhaps she’s not quite sure who exactly Krauthammer is.