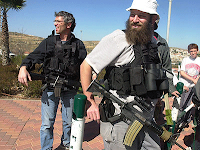 Robert Wright believes that the UN can dictate the borders of a Palestinian state on the West Bank and Gaza and then proclaim it into existence. If you wonder who would turn the abstraction into a reality, you have to go to the fine print on Wright's blog. There, he concedes that the success of his idea would depend on the fall of the Netanyahu government and the willingness of the Israeli army to disarm those defending the 400,000 Israeli settlers (like these guys in Hebron) who would be forced to leave their homes in the West Bank.