The Pink Lady And I 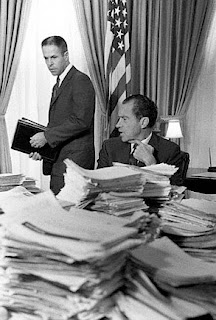 Writing about the efforts that Richard Nixon made to keep his presidential records under wraps as long as possible, Maarja Krusten reviews the fascinating role played by a future chief justice, John Roberts, when he was a member of the Reagan White House staff. She concludes:

Nixon’s big mistake was recording the conversations in the first place. As Haldeman [shown here, with Nixon] put it in his memoirs,”Imagine your own feeling if you were to open your Monday morning paper and find someone had taped all the conversations in your home over the weekend—then selected the very worst segments and printed them in the paper. That’s just about what happened to us.” Haldeman nevertheless believed as early as 1979 that it would be good to open more tapes beyond those played at the Watergate trials: “I know that there is also some very great material. And I feel sure the ‘good’ outweighs the ‘bad.’ Thus Nixon has everything to gain and little more to lose from release of additional tapes.”

Some day scholars will benefit from all the hard-won disclosure decisions, which give a unique glimpse in the recorded conversations at governance and at Nixon as man and as president, information which the fair minded can put to good use. Historians will have to judge for themselves when Nixon was venting and when what he stated constituted action items. And when his private comments matched his public policy positions and when, as often occurred, they did not. I dare say journalists will continue to report on the most sensational items—and there are plenty of those, as well.

Actually, it's surprising that all the tapes aren't open by now. In an earlier essay, Krusten reported that they were ready to be opened in 1988. After Nixon died in 1994, as his legal co-executor I began to negotiate almost immediately to settle a lawsuit that historian Stanley Kutler (below right) had brought against the National Archives to compel the opening of tapes that archivists believed related to abuses of power. We reached a deal in 1996. As I recall, we envisioned having all the tapes opened by 2000.

The Nixon library has now promised to have the last 400 hours opened by 2012, meaning that, in time for the next presidential election, there'll likely be another round of headlines about the subject that seems to be of greatest interest to journalists: Nixon's views about Jews, African-Americans, Italians, Lithuanians, and, if we're really lucky, little green men. Good thing he won't be running. The sooner all that's over, the sooner writers will get to work on the less salacious, most substantive materials housed in Yorba Linda.

It may seem odd to Maarja to hear the likes of me press to get everything open ASAP. My attitude about these matters actually changed beginning in 1990, when I became director of the private Nixon library. Nixon-like, my conversion was sparked by crisis. Before the library's July 1990 grand opening, my predecessor as director, Hugh Hewitt, made the impolitic announcement, in response to a reporter's question, that the most famous and respected journalist in the U.S., Bob Woodward, wouldn't be welcome to do research at the library. That pretty much destroyed any credibility we might otherwise have had with the scholarly community (though I didn't help matters myself many years later by canceling a conference we'd planned with Whittier College on the Vietnam war, which I briefly feared might delay our handover to the feds in 2007).

Soon after arriving at the library in September 1990, I grasped for a measure of redemption by recruiting an archivist and promising that I’d never interfere with her dealings with scholars and researchers. Eventually we even had something to show them, since we’d taken custody of a significant cache of Nixon’s congressional and vice presidential papers from the National Archives. The collection, which he’d never deeded to the government, had valuab

le documents about his early campaigns, the Alger Hiss case, and Nixon's international missions for President Eisenhower during the 1950s.
Back in Saddle River, Nixon monitored this process with considerable unease. It was one thing to open a chest-thumping museum using his rich friends’ money, another thing entirely to dish the contents of his personal files to liberal professors. He indulged me, but warily. He couldn’t have cared less about my conviction that a functioning, independent archive was vital for institutional credibility. “Institutional credibility” was the kind of formulation that could render him almost asphyxiated with helpless rage. Didn’t I understand, he would say, that all that mattered was his credibility? I actually did understand, and yet I was tempted by the idea that we could have both.
It helped a little that our first archivist was a rock-ribbed Republican. It helped far more that she was astonishingly slow. Our reading room wasn’t ready to open to the public until a few months after Nixon died. As he would’ve said, I had dodged a bullet.

Before long we began to receive visits from scholars and researchers who were interested in Nixon’s early years in politics. I was pleased in 1998 when Greg Mitchell, a left-leaning editor and journalist who writes a media blog at “The Nation,” published a book about Nixon’s 1950 senatorial campaign against Helen Gahagan Douglas that relied heavily on documents housed at the library. Like most historians, Mitchell was critical of Nixon’s campaign tactics, and yet I reckoned it as a win because he praised the Nixon library in his acknowledgments.It wouldn’t have pleased Nixon, I don’t think, though by now, four years after his death, it was hard to be so sure what was best. Because of my roles at the library and in his estate, I had a considerable amount of discretion about how we were going to position ourselves in relation to the scholarly community. He wasn’t around to consult, obviously, though I often found myself imitating his gravelly voice and, I sometimes supposed, even channeling his instincts.

By the time Mitchell’s book came out, we were fully committed to getting the library into the National Archives and thus consigning Nixon’s legacy to generations of historians as yet untrained or unborn. Was it what he would have wanted? I assumed so, if only because he was smart enough to realize that his retainers and immediate family members wouldn’t be around forever to stand guard and dust the exhibits in the lavish pro-Nixon museum we’d built upstairs.Besides, as a lifelong student of history and biography, he knew he would be judged according to what appeared between hard covers, not within the walls of a museum. If historians – even those whose outlooks and temperaments hadn’t been molded by the passions and agonies of Vietnam and Watergate

-- never took a fresh look at the Cold War’s greatest pragmatist, if they ultimately decided that he quit outweighed he went to China, then it didn’t matter what we did. As I looked without a trace of angst at our brand-new copy of the Nixon-ravaging Tricky Dick and the Pink Lady: Richard Nixon Vs. Helen Gahagan Douglas -- Sexual Politics and the Red Scare, I realized that I’d taken a leap of faith. Like it or not, Richard Nixon now belonged to Greg Mitchell (founding editor of “Crawdaddy,” a trailblazing 1960s rock and roll magazine, which is cool) and his colleagues and heirs.
By Fr. John at 2:57 PM