Goodbye And Hello To Clarence And Ed 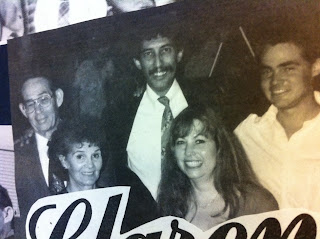 I still remember the night in 1974 when my college buddy Ed Simons (shown here with his arms around father Clarence and brother Gabriel; mother Aurora and sister Celeste are there, too) said, "Let's go to Denny's for coffee."

I said, "Why would we want to do that?" While Starbucks had gotten its start in Seattle three years before, the cafe ethos hadn't yet intruded on the reality of southern California 19-year-olds.

But Ed eyed me narrowly (the sort of phrase he used in his columns for the UC San Diego paper, where we both worked in lieu of attending classes). And so we went to the Denny's near the Del Mar race track and fairgrounds, laid down our 39 cents each, and drank coffee for about two hours, cup after bottomless cup. I've been hooked ever since.

Ed, who died 15 years ago, was surely amid and among his family and friends this morning in Norwalk, near Los Angeles, when they said goodbye to Clarence, whom they lost last week after a long illness. I officiated at the service. The bemusement Ed would ha

ve experienced about my following a priestly vocation seemed to radiate from the face of our friend and roommate, research scientist and nutrition maven Mark McCarty, a devotee of Clarence who'd driven up from San Diego. Mark sat grinning about four pews back. I tried not to meet his eyes except when I slipped in a completely gratuitous reference to Stephen Hawking.

Clarence and his beloved Aurora (pictured above with her brother Alfred) were married for 52 years and had five children. I'd never heard anyone talk about their siblings more than Ed did about Celeste, Cecille, and the twins, Gizelle and Gabriel. He talked about his father with a reverence that exceeded that reserved even for his '68 Nova (which he called the Colonel), Blue Öyster Cult, and the guitar playing of Nils Lofgren (way before he joined the E Street Band).

Ed was a talented guit

arist, singer, and composer himself. I remember the first verse of a song he wrote about the working class town south of San Diego, National City, where the Simonses settled for a time and I worked on the newspaper for a year or so:

Ed spelled "mountain" differently, but this is a family blog. Musical ability was among Clarence's considerable gifts to Ed and the rest of his family. He played trombone in an Army band during World War II and, after the war, the double bass in jazz bands while running the musicians' union in his home town of Savannah (where he'll be buried next week). I could swear he told me once that he handled the details when Alan Greenspan's big band came through town in the late 1940s.

He married Aurora six months after they met. She sang in his band for a while and even played some drums before they moved to her home state of California, where he spent over 30 years teaching music in the Los Angeles Unified School District. At the funeral, Cecill

e's 15-year-old daughter Emma, accompanied by her father, Cisco Araya (brother of Tom Araya of Slayer), sang with a lovely, powerful voice, belting out the song as though she knew that if she held back, she'd start crying. "He protected us," Clarence's younger son Gabe told me when I asked what he most remembered about his father. "He told us everything would be all right. He comforted us."

Clarence was Presbyterian; Aurora's Roman Catholic. Ed's southern California-based sisters, Cecille and Gizelle, have found their way to St. Luke's Episcopal Church in Long Beach. Emma and her 12-year-old brother, Isaac, have spent the last two summers at our diocesan summer camp in San Diego county, where, it turns out, they met my younger daug

hter Lindsay, who's on the camp staff.

There was more synchronicity after the service, when one of Clarence's LAUSD colleagues, Sheldon Alpert, introduced himself. While talking afterward over a delicious lunch at Gizelle's La Habra home, we learned that we'd performed together once at the Nixon library, Sheldon as a violinist in the orchestra for a Yorba Linda organization's annual "Messiah" singalong and I as narrator. That's Sheldon at left, with Gizelle, her younger daughter Olivia, and Mark McCarty (who would like to tell you about Spirulina as a source of phycocyanobilin). Sheldon and I had never actually met before, but we did today thanks to Clarence and Ed, and we'll all meet up eventually. That's the small, abiding comfort that comes from memorializing and celebrating those we love and lose in faith.
By Fr. John at 11:00 PM