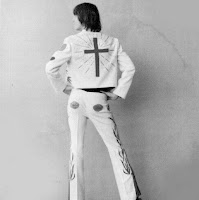 Why has Gram Parsons' makeshift memorial in Joshua Tree National Park been removed, and why don't park service personnel acknowledge that it's been done?

As a member of the Byrds and Flying Burrito Brothers and a solo artist, the Florida-born Parsons mixed rock and country music, setting the stage for the Eagles and Linda Ronstadt in the '70s and the alt.-country movement in the '80 and '90s (Wilco, the Jayhawks, Uncle Tupelo, Ryan Adams, those guys). He distracted Keith Richards in France when the Rolling Stones were trying to finish "Exile On Main St." and helped launch the caree 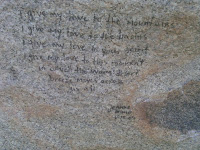 r of his talented backup singer, Emmylou Harris. His recording of one of his greatest songs, "Return of the Grievous Angel," is available here; hers is on a 1982 live album, "Last Date," that iTunes hasn't made available yet. You can hear and see her performing the song in July 2008 here.

After he died of a drug overdose in 1973 at the age of 26, an overzealous friend stole his body and set fire to it in Parsons' beloved Joshua Tree. Fans have been making the pilgrimage to Cap Rock every since, carving and painting 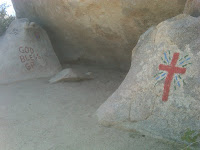 crosses, poems, and other tributes. I visited in April and took the photos at right.

When I returned on Tuesday to what I was pretty sure was the spot, everything had been sandblasted away. While my photo below doesn't show it, the red cross and the legend "God Bless GP" are gone.

Thinking I just might have gone to the the wrong place, I dropped by park headquarters in Twentynine Palms to check. Two guys behind the counter, one a uniformed park ranger, ins

isted that the memorial was intact. The one in street clothes said he'd been there in the last two weeks and even drew me a map. Just to be sure, I returned this afternoon. I'd been right the first time. The crosses and inscriptions were gone.

The devotion of Parsons' fans notwithstanding, I can understand the feds being loath to appear to be celebrating drug overdoses and illegal cremations. Nor should people be permitte 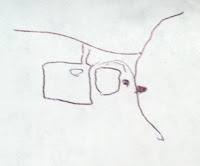 d to deface publicly-owned natural wonders. As a nostalgic babyboomer, I could see making an exception in this case; I can also understand closing it down. What I can't understand is why my two friends at park HQ didn't just cop to it.
By Fr. John at 10:16 PM

I was having a conversation a few months ago with a friend who lives near JTNP about a very similar subject. Some friends of hers knew about a paleoarcheological site in the park, a prehistoric astronomy site, akin to Stonehenge, which precolumbian peoples constructed to mark the solstices. This site is not only not on the list of official park sites, the rangers actively keep people away, to the point of posting guards on the night before the sunrise on the solstice. Similarly, they will never tell the public where petroglyphs might be found, out of fear they will be valdalized. We concluded that the rangers have a complicated agenda, only part of which is part of the public, official face of the park, and other parts of which they have determined -- usually to protect certain sites -- must remain hidden. Still other sites, such as the Parsons site, lie outside the offical "Olde West" history of the park which is its public face. To the park service, nothing significant has happened in the region since the 1940s, and if they had their way nothing will be allowed to happen outside the officially encouraged activities of camping, hiking, etc.

Thanks for your comments. I can understand why those who are charged to care for a place, take their work seriously, and can't be everywhere at once would be overly protective of certain sites (such as the astronomy one you mention, which sounds fascinating). On the other hand, there should also be a bias in favor of enabling the public to see as much as it can.

I've been wondering since I wrote my post whether the NPS periodically cleans up the GP site so that others can come and leave tributes. Again, all they had to do was tell me!