Abandonment Be Not Proud 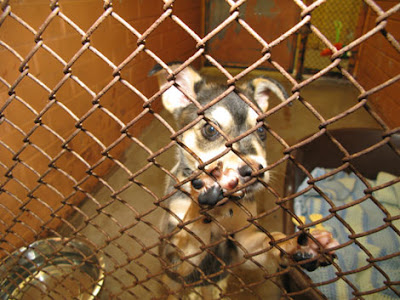 A few years ago Kathy and her family got a kitten from a friend and named it Monty. Monty had a screw loose and would come at you from across the room like the killer rabbit in Monty Python and the Holy Grail. The little tiger soon ended up at the Orange County animal shelter. In those days, a cat got ten days, then curtains.

Although Kathy and her family and friends celebrated their just liberation from Monty's dagger claws, I couldn't stop thinking about him. A week into his incarceration, I sneaked down to the shelter. I prayed I wouldn't find him, because I almost certainly would've taken him back. Instead, since he was cute enough on cursory inspection, I hoped that he'd attached himself to the tender underbelly of some innocent family.

He wasn't there, but someone else was. When a Christian friend tells me that she can't imagine a personified Satan, I remember sensing the presence among all those spurned animals of a distinct creature. In A Christmas Carol, Charles Dickens presents Ignorance and Want as a little boy and girl. As I blinked through tears into cage after cage, I felt the presence of Abandonment.

I'm not an animal lover. A pet would be too inconvenient. I do advise those who say they're considering going to a pet store that there are tens of thousands of pleading faces at their local shelter that can be had for a license fee and the cost of vaccinations. The economy is making the excess-animal problem even worse. Today the Orange County Register reported that our local shelter took in nearly 31,500 dogs and cats last year, a 13% increase from the year before, and had to put nearly half of of them to death. Killings are up nearly a third over last year.

We should of course mourn these tiny tragedies. Even more, we should mourn whatever selfish or careless human choices contribute to them. Are living creatures really becoming more expendable in bad times? Such a trend wouldn't bode well for vulnerable humans, either. Instead, as we are tested, may Abandonment be not proud.
By Fr. John at 11:47 AM