If They'd Only Just Do What I Say 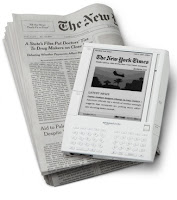 [N]ewspapers have to buy about a million Kindles and give them away in promotions focused on college-age and young adult readers who, in their finite wisdom, have decided they know better than newspaper editors what kinds and categories of news they should view each day. The Times should give away (or sell for a song) 100,000 Kindles with trial subscriptions preloaded.

Not that it's anything we think the New York Times Company should do, but we thought it was worth pointing out that it costs the Times about twice as much money to print and deliver the newspaper over a year as it would cost to send each of its subscribers a brand new Amazon Kindle instead.