A few scholars and writers -- James Hougan, Len Colodny, Joan Hoff, Jonathan Aitken, and James Rosen -- have challenged the conventional wisdom about Watergate, especially the role of White House counsel John Dean. Some even assert Dean covered up the Watergate break-in to obscure his own crimes, not President Nixon's.

Among Dean's friends and boosters is scholar Stanley Kutler, whose 1997 book Abuse of Power contains transcripts which he seemed to edit to make it appear that Mr. Nixon had known in advance about the September 1971 break-in by the White House Plumbers at the office of Daniel Ellsberg's psychiatrist. When I challenged Kutler an "American Spectator" article, he corrected the most egregiously misleading passage in the paperback edition.

Elsewhere on the tapes, the President is heard telling aides that someone should "buck up" GOP senator Howard Baker. In Abuse of Power, Kutler used a different consonant at the beginning of the word "buck." In my "Spectator" article, I wrote that anyone who'd spent much time with RN knew his preoccupation with making sure discouraged allies and aides were bucked up. In this case, Kutler didn't take my advice, and so the unspoken expletive remains, along with the spoken ones, in Abuse of Power. The Ellsberg break-in reference, though, was far more important, and Kutler deserves credit for having changed it.

His wasn't the only counterfeit smoking gun. In his 2008 book Nixonland, Rick Perlstein misconstrued a secondary source to make it appear as though the President had approved the Ellsberg break-in. It's a vital nuance, because if the President had known of illegal activity by the Plumbers, his Watergate-related statements and actions in June 1972 appear in a darker light. Although we pointed out Perlstein's error at The New Nixon in July 2008, he never addressed it, though he replied to many of our other posts about his book. To be fair, I don't know if he has dealt with it in the paperback edition, as Kutler did.

Kutler's Watergate scholarship and his personal friendship with Dean are receiving new and surprising attention today in the New York Times, which describes an article about Kutler's work that scholar Peter Klingman has submitted to the prestigious "American Historical Review":

[L[ongtime critics of his transcripts say Mr. Kutler deliberately edited the tapes in ways that painted a more benign portrait of a central figure in the drama, the conspirator-turned-star-witness, John W. Dean III, the White House counsel who told Nixon that Watergate had become a “cancer” on his presidency.

Oddly, we don't know whether Klingman's article will even be published. Nor is it immediately clear how the controversy ended up in the paper. In my experience, Times articles and even editorials about Nixonian archival questions have something of the immaculate conception about them. One day, they're just there. Why is the poor man's peer review being performed in public? 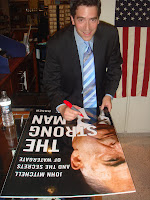 Such mysteries abound when it comes to the accusations that periodically swirl around John Dean. His role as the repentant, whistle-blowing hero seems to be so important to the prevailing Watergate narrative that alternative theories not only aren't investigated, they're essentially aborted. The most recent example is the odd decision by the Times itself not to review James Rosen's full-scale, carefully researched biography of former attorney general John Mitchell, The Strong Man, which raises many questions about Dean as well as the opportunistic actions of Watergate prosecutors.

The paper's decision on the Rosen book makes its coverage of Klingman's journal article especially intriguing. Perhaps someone hoped a well-timed Times article would be a Saturday afternoon massacre deterring the "American Historical Review" from saying yes. That possibility seems unlikely in view of this comment in the article by the respected former supervisory archivist in charge of the Nixon tapes, Fred Graboske:

“I spent 12 years listening to the tapes,” he said, contending that no one could mistake the evening and morning recordings as being part of the same conversation. “I don’t know why he did it, but what he did was deliberate.”

He added: “I did work with Stanley. I’m sorry that it has come to this.”

Anyone who takes the time to listen to the conversations, such as those posted on the Times site, and compares them to Abuse of Power, will see they don't match. How could that have happened accidentally?

Kutler has known about questions about his transcripts for more than a decade. I edited a story for The Tampa Tribune in 1998 that detailed some of these inconsistencies. Kutler tried to dismiss them by saying they couldn't have happened.

Both Kutler and John Dean have dealt with these questions by issuing Nixonian nondenial denials. Kutler says he doesn't work that way. Dean attacks the questioners as fringe revisionists. Apparently both think history can only mean what they want it to mean.

These questions have been a long time in coming, and it's remarkable that the Times had the courage to look into the matter and force Kutler and Dean to explain their actions. Those explanations are wanting.

Anyone who's serious about learning more about what actually happened during that time in history should examine the conversations themselves. Kutler's transcripts should be considered thoroughly discredited, as should the man himself.

The New York Times has also yet to review "Family of Secrets" by Russ Baker, who blows the lid off of the Watergate coverup and John Dean's true role in deposing Richard Nixon. As Baker makes clear, the Establishment, including George H.W. Bush, wanted Nixon out because he had become a danger to them. They thought they could control him, the way the conservatives in Germany thought they could control Hitler. But Nixon, once he won, had no further use for them. In fact, his domestic policies were to the left of those of the Democrats. (He supported National Health Insurance while Ted Kennedy opposed it.) He had to go, and they made sure he went. John Dean was a player in this and he was rewarded with a successful career as an investment banker when it was all over and Nixon was gone. I strongly urge everyone to read "Family of Secrets." You won't be disappointed.