How To Perform Economic Stimulus At Home 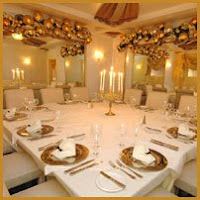 While the White House in Washington was finished in 1800, the Anaheim White House is a mere 100 years old -- although in southern California, that's un casa blanca mucha vieja. The stately old residence has been a restaurant for years. Bruno Serato bought it in 1987. His award-winning menu is a tasty melange of European cuisines with a stress on northern Italy. It's a wonderful date and anniversary choice, with a courtly, knowledgeable staff. Bruno and his team also cater many events in the Nixon Library's White House East Room.

Soon after Tim Naftali was named the first federal director of the Nixon Library, Kathy and I hired the White House to prepare a dinner in his honor for some church friends (including the other Bruno, J. Jon, the Episcopal bishop of Los Angeles), at our home in Yorba Linda. Bruno Serato's internationally noted executive catering chef, Maurice Brazier, and Madame Brazier arrived two hours before dinner, perhaps thinking just for a moment that they had located servants' quarters behind a larger estate where the meal would actually be prepared and served. Chef Maurice and his colleagues did a masterful job maneuvering around one another in Kathy's lovely if normal suburban kitchen.

The Anaheim White House was in the news this week, and it wasn't a restaurant review. Did the Nixon connection finally doom our friend Bruno to controversy? Not quite. Wrong party. The shrimp hit the pan only after he announced to 20,000 on his customer e-list that he'd unveiled a Barack Obama Room (above). The President's hardly Bruno's first modern Democrat, since he has long had Roosevelt, Truman, Kennedy, and Carter rooms. But for some, Obama was beyond the kale. As the Orange County Register reported yesterday:

"I am not an Obama supporter," read one angry e-mail. "I could never be, and as much as having an African-American in the White House could be a good thing, having one with Marxist ideals is certainly not a good thing! I will not be patronizing your restaurant, much less the 'Obama Room.'"

Bruno (who won't disclose his own 2008 vote) wisely alerted the media to the controversy, resulting in a richly-deserved boost in a down economy for fine dining. Bravo, Bruno, for your bipartisan marketing flare! 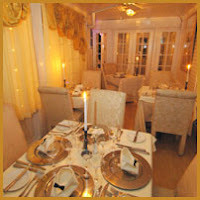 I served up a political puree of my own recently that probably got one star at best in some circles. On Jan. 9 at the Nixon Library and again yesterday at the Pacific Club in Newport Beach, courtesy of St. John's friends Bob and Ann Mosier, I gave a talk in which I said that President Obama had strong Nixonian tendencies (Bruno's Richard Nixon room is at right). First, both Presidents have displayed a gnawing hunger for reconciliation, which 37 practiced on the international stage (in a way that would've greatly pleased his Quaker mother, Hannah) and which Obama, as he works through his complex familial and ethnic heritage, aims for politically and domestically. Second, I surmised that since Obama, like Nixon, believes that history is on the side of the principles he loves, both will be remembered for being satisfied by incremental, pragmatic change most of the time. But third, just as Nixon achieved exponential change by engineering his opening to China, Obama has already staked out the Israel-Palestinian issue as his bid for foreign policy greatness, even though most other Middle East-embroiled Presidents have tasted ashes -- with the exception of Jimmy Carter at Camp David, which must have been as rich as Maurice's Bearnaise sauce.
By Fr. John at 2:31 PM