Get Her A Future 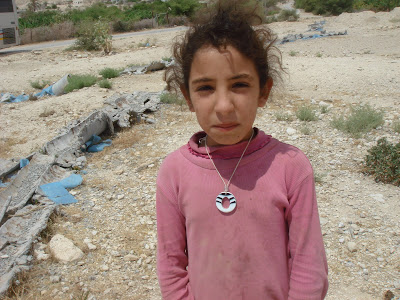 Friends think I'm naive (or just plain wrong) for believing that Israelis and Palestinians can share the Holy Land in peace -- in other words, that the two-state solution, now fully embraced by Barack Obama and his envoy, Sen. Mitchell, just like Bush and Rice before them, will work. Pro-Palestinian friends are afraid that Israel will never give up its settlements and that the security wall is being used to make a West Bank Palestine untenable. Orthodox Jewish friends equate the Palestinians with the Amalekites in the Hebrew Testament, who harassed Abraham and his people and were defeated, along with the Midianites, by Gideon. Bible-believing Christians often can't help thinking that God gave the land to the Jews. Secular supporters of Israel argue that the Palestinians can't be trusted, in part because Arab leaders throughout the region have conspired to keep them in refugee camps for two generations rather than assimilating them into Jordan, for instance, thus creating an uncontainable reservoir of hatred.

For all these reasons, Presidents usually avoid expending political capital in the region, or they wait, as President Clinton and Bush 43 did, until the end of their terms. Obama acted in the first hours of his Presidency. For such noble and perhaps politically self-sacrificial recklessness alone, he deserves our thanks.
Accepting his designation as special envoy, Mitchell, who helped Clinton untie the Irish knot, said that the problem is caused by human beings, and human beings are capable of solving it. About that, he is right. Israelis are people, and they must trust and share. Hamas are people, and they must accept that Israel will survive and thrive forever. Fatah are people, and they must earn the trust of Palestinians everywhere, and learn to govern a country and grow an economy after a generation of fighting and killing. Americans are people, and they'll punish Obama if he fails.
Like Mitchell, I'm hopeful, if only theologically. Someday, it must end, for the sake of the little girl pictured above and millions like her. I met her on a pilgrimage to the Holy Land in the summer of 2007, sponsored by my Episcopal seminary in Claremont. Having walked three miles through a desert wadi to Jericho, we were staggering toward the bottles of water on our bus. Children were asking for money, and I gave some to this little girl, smiled, and kept going. Then I felt a tug on my sleeve. I turned and saw her pointing at my camera. Godspeed, Sen. Mitchell. Get Israel security and peace, and get her a future.
By Fr. John at 4:49 PM